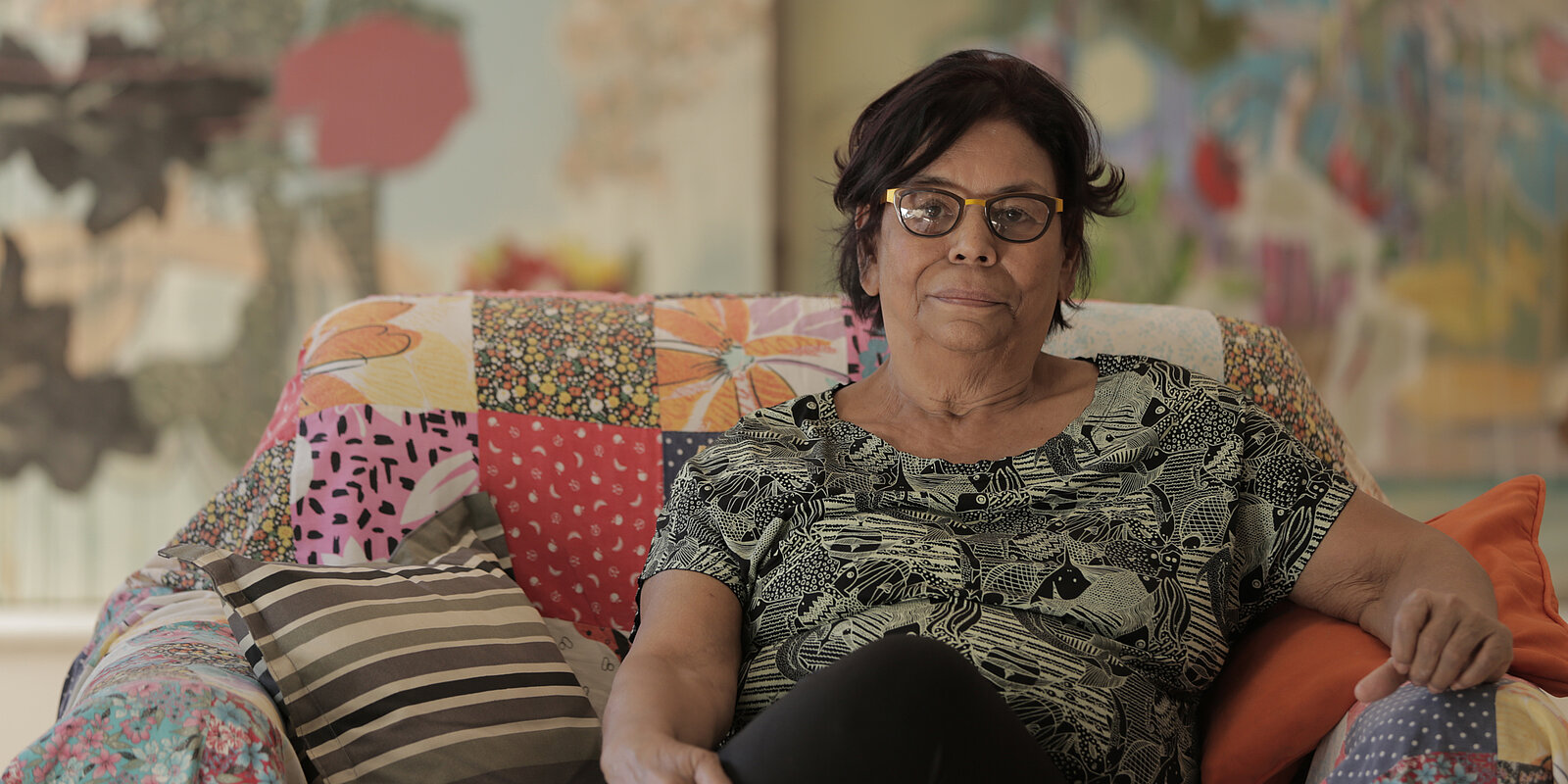 Lucia Laguna began her artistic career after studying art from 1995 to 2011 under Charles Watson at the Escola de Artes Visuais do Parque Lage in Rio de Janeiro. The Cândido Mendes Cultural Centre in Rio de Janeiro staged her first solo exhibition in Brazil in 1998, which quickly brought her work to public attention. Her participation at the 30th São Paolo Biennale in 2012 marked a decisive turning point in her career. In Brazil, she is now considered a star among contemporary Latin American artists, and her works are now to be found in her home country’s leading public collections. Laguna’s paintings and collages plunge us into Brazil’s luxuriant vegetation, creating a tropical atmosphere with their depiction – in vigorous, luminous colours and shades of green – of the country’s huge diversity of plants and flowers. The artist succeeds in capturing all the many-faceted opulence of her immediate surroundings, as well as of her own inner pictorial world. Masterly confrontations of forms appear at the same time organic and geometric awaken the impression of constant movement and never-ending change. Her compositions are like palimpsests from visual impressions, sometimes concentrated and sometimes dissected into fragments of objects and scenes of the widest-possible variety, even seamlessly blending figural and abstract painting styles. Laguna’s paintings come across sometimes as expressive and full of energy, sometimes as light and free-flowing, and nearly always seem pervaded by atmospheric light. In one series of paintings and collages – Landscape (Paisagem), Garden (Jardim) and Studio (Estúdio) – interior and exterior views collide. On the one hand the artist works with a patchwork of street motifs, wildly proliferating green areas and architectural fragments such as she can see from the windows of her studio in Rio de Janeiro. On the other hand she has in this studio a collection of snapshots of her jungle-like garden, of views of Rio de Janeiro, and reproductions of masterpieces of art history.
Further inspiration comes from notes and newspaper cuttings pinned up on a bulletin board, as well as books and catalogues piled up on tables and benches, not to mention other decorative objects.

Consequently Laguna’s works are the result of a dialectical relationship between her own artistic world of ideas and pictures on the one hand, and those of other artists on the other. In a lively exchange with numerous art students in Rio de Janeiro, she randomly commits pictorial motifs and colours to the canvas, using acrylic and other techniques. In this way, her studio becomes a workshop: at the start of the work process, she discusses the various themes with her students and has them spend weeks working on a canvas. Inspired by the pictorial fragments produced by her students, Laguna then introduces more and more of her own self, ultimately completing the work entirely on her own account. Using self-adhesive masking tape, she divides the picture into individual fields, lines and angles, so that these are preserved during the overpainting process to be made visible once more later. The final paint-layer, executed in oils, thus overlays a number of preceding acrylic layers. In the process, the work is rotated several times, resulting in new pictorial associations and unexpected perspectives. Laguna’s works require conscious perception if individual parts of the pictures are to be read in their respective context. In contrast to the Cubist approach, she does not seek any synthesis of the depicted motif. She is suspicious of the desire for synthesis, in the knowledge that the present is extraordinarily unstable, being dominated by an unstoppable deluge of images, the rapid tempo of modern city life, and the constant encroaches of nature. Lucia Laguna, born in Campos dos Goytacazes, Brazil, in 1941, lectured in Portuguese and Latin language and literature for thirty years. It was only between 1995 and 2011 that she studied at the Escola de Artes Visuais do Parque Lage in Rio de Janeiro, where Charles Watson, who taught creativity research, became her mentor. The Cândido Mendes Cultural Centre in Rio de Janeiro staged her first solo exhibition in Brazil in 1998, which quickly brought her work to public attention. Her participation at the 30th São Paolo Biennale in 2012 marked a decisive turning point in her career. Her works had already been included in group exhibitions staged by European institutions such as the Martin Gropius Bau in Berlin, the IVAM in Valencia, Spain, and the Museum of Contemporary Art in Antwerp, Belgium. In 2006/2007 Laguna was awarded the prize of the CNI-SESI Marcantonio Vilaça para as Artes Plásticas. In 2011 and 2015 she was the recipient of the PIPA Prize, which is awarded jointly by the PIPA Foundation and the MAM-Rio. Her works can be found in important public collections in Brazil, including the Museu de Arte Moderna in Rio de Janeiro, the Museu de Arte Moderna in São Paolo, and the das Museu Nacional in Brasilia. Lucia Laguna lives and works in Rio de Janeiro, Brazil.