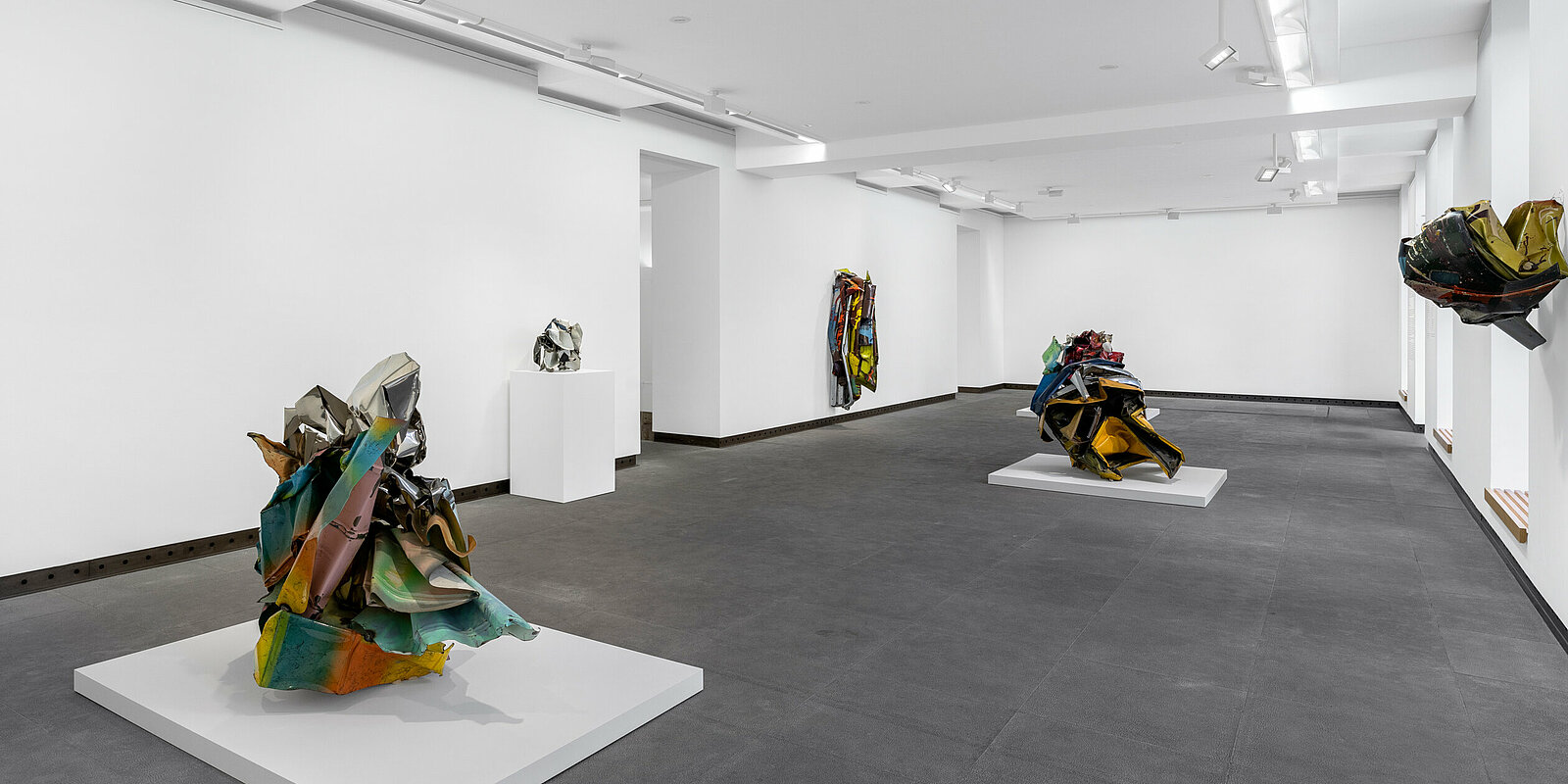 Tuesday - Saturday 10am to 7pm

The exhibition will be extended until February 15, 2023.

“Everyone is so enamored with things they recognize, but the key purpose of art is to find out what you don’t already know.” - John Chamberlain

John Chamberlain was one of the greatest artists of the twentieth century, a master of metal‑folding and ‑transformation and an exceptional colourist. The post‑war zeitgeist (spirit of the time) propelled artists to experiment and seek new freedoms, liberating themselves from past dogmas. The abstract expressionist movement emerged in New York in the interwar period and blossomed fully after the Victory of 1945. John Chamberlain espoused the movement, in which plastic language was considered self‑sufficient through a new relationship to gesture. 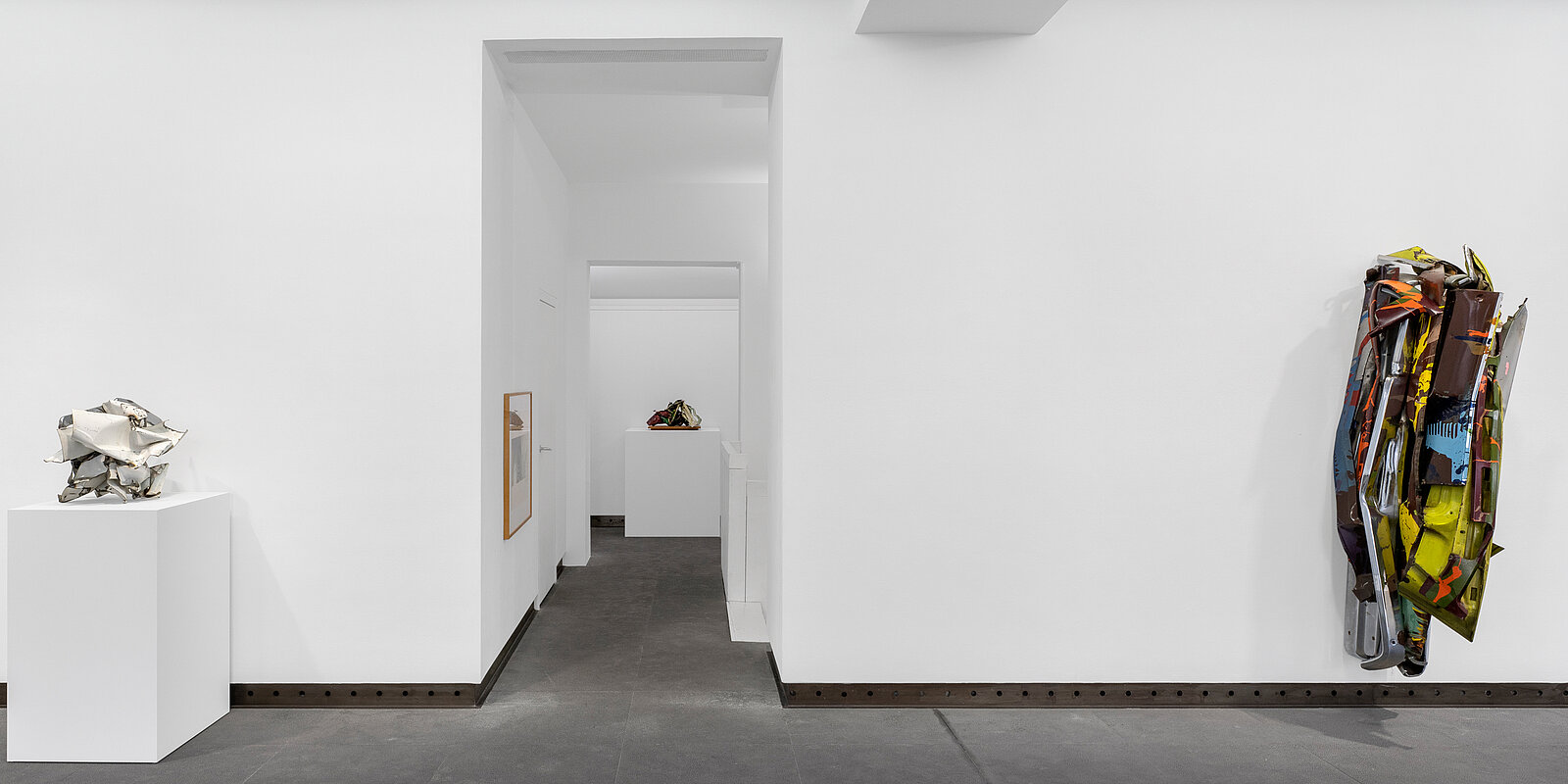 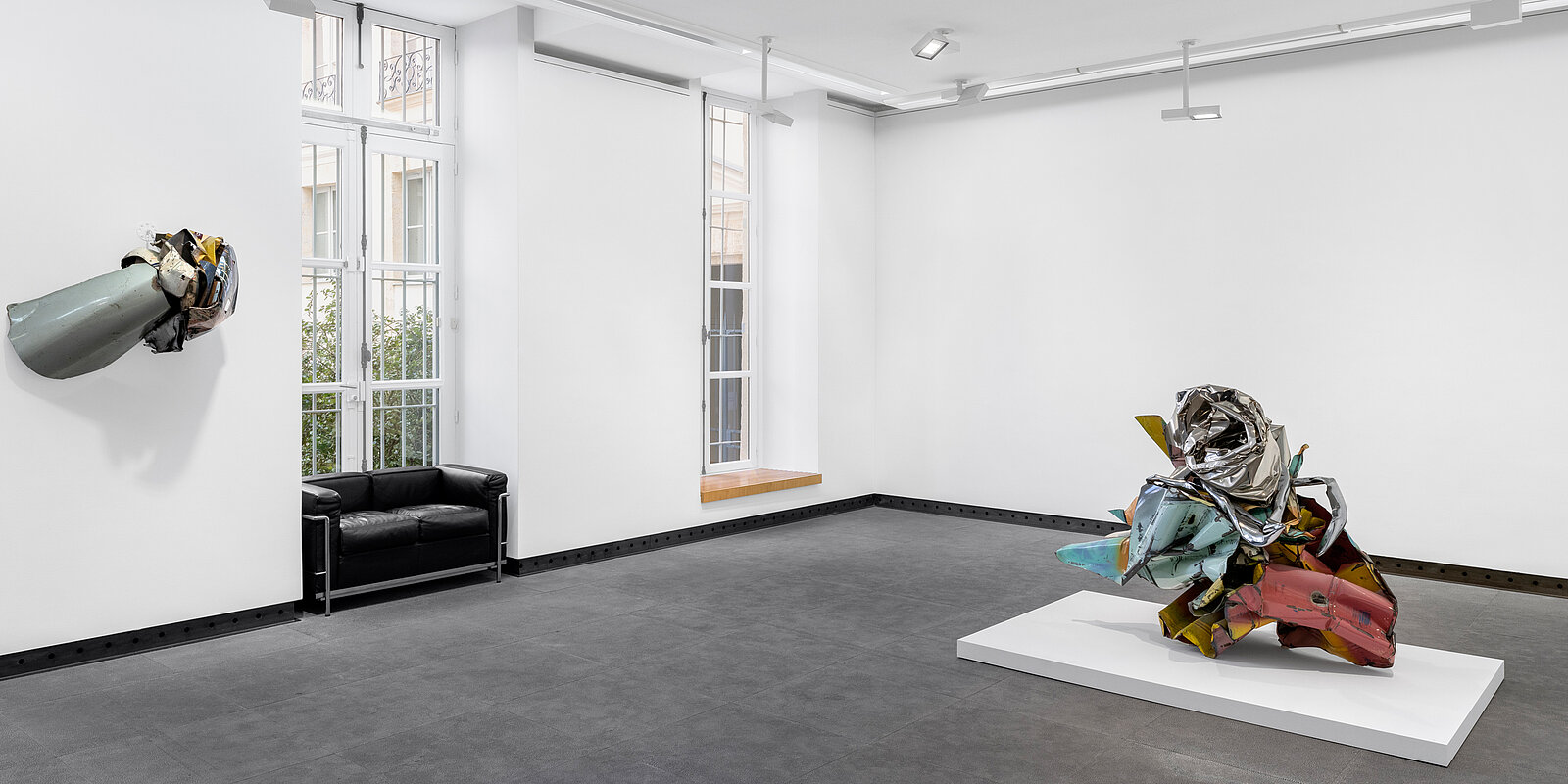 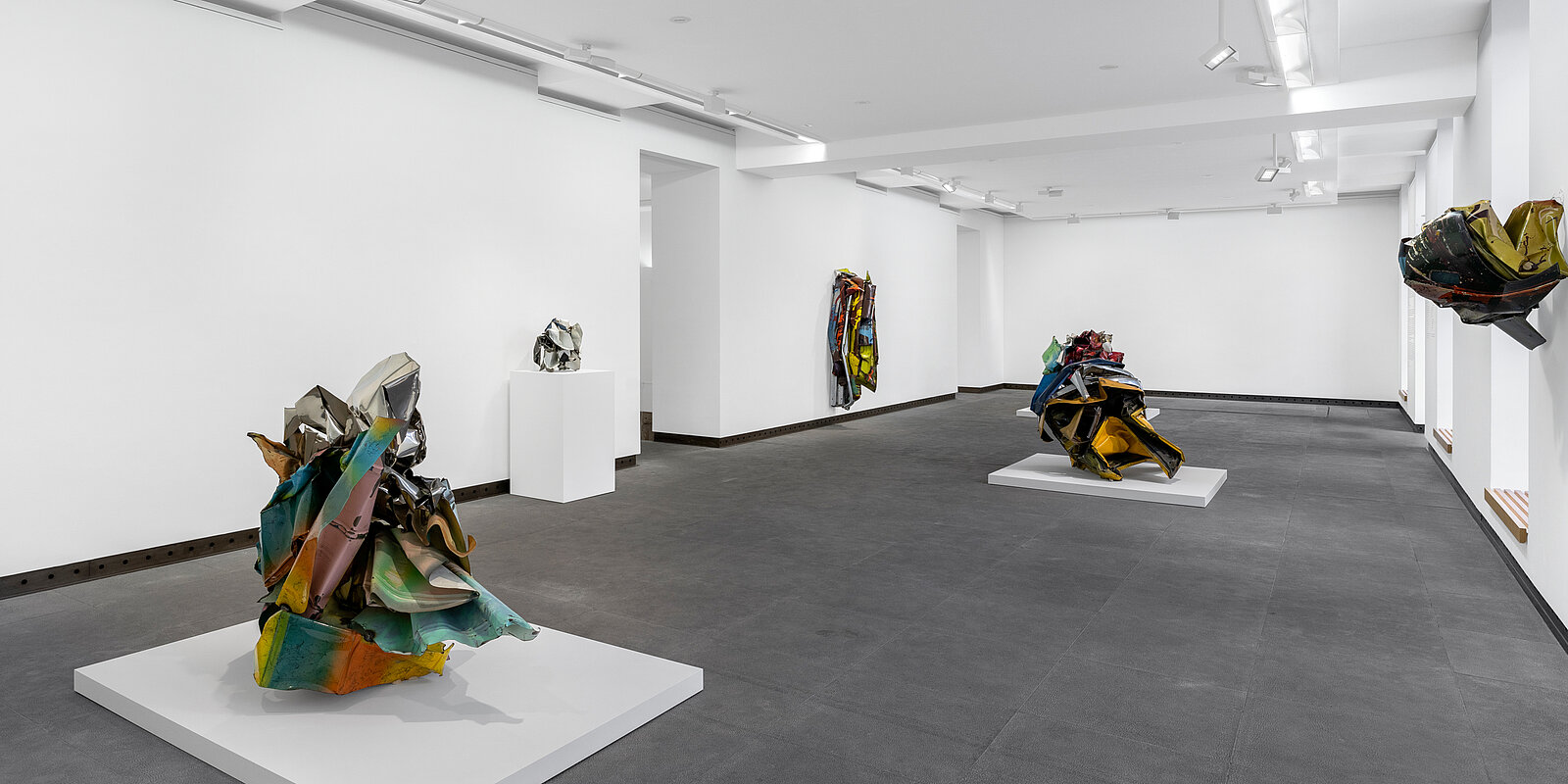 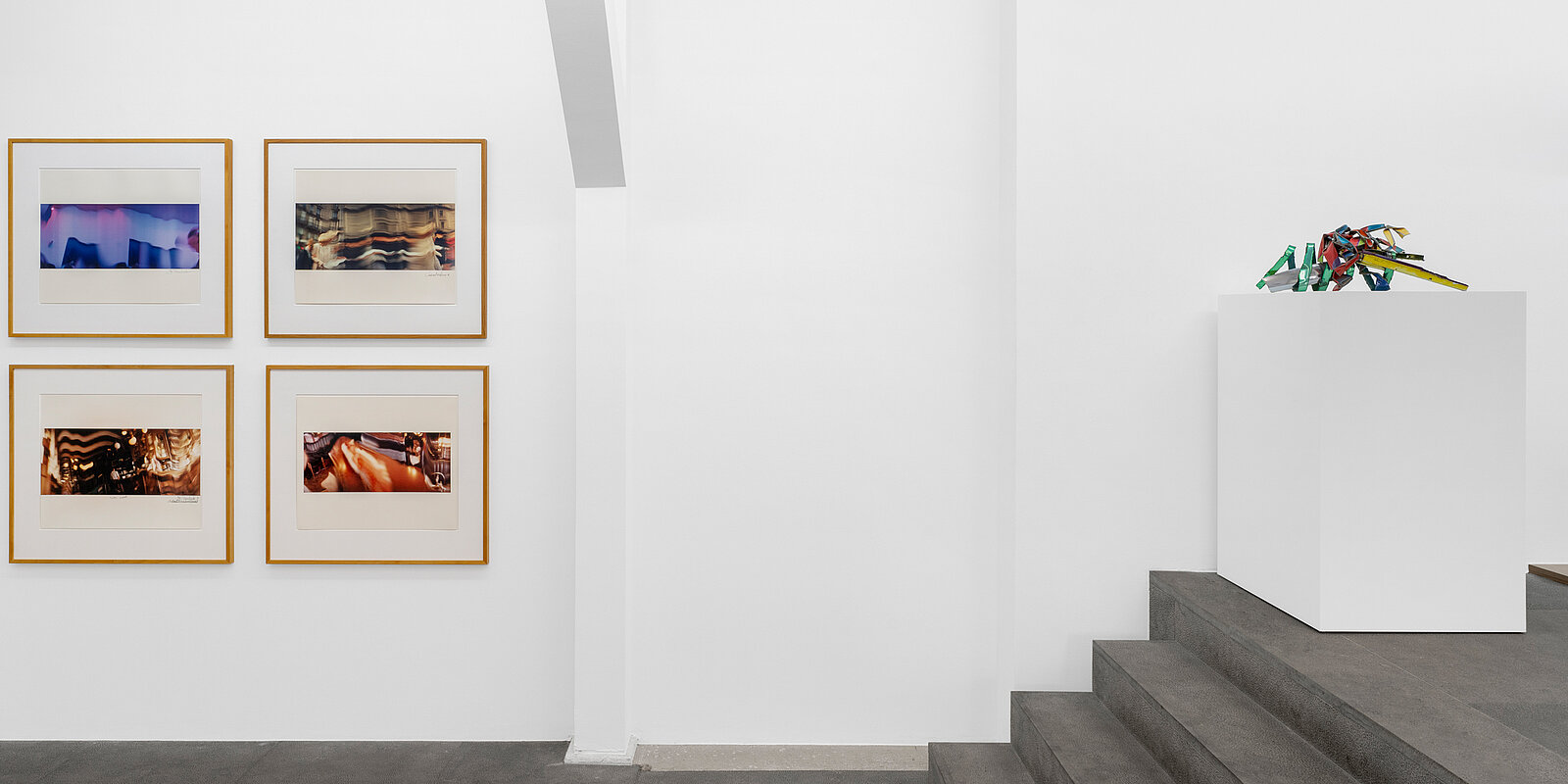 Quite rapidly, John Chamberlain chose his material: steel, which he often scavenged and selected from abandoned cars. He would reshape it endlessly. The medium became an “arena in which to act”, to use Jackson Pollock’s expression. In a way, Chamberlain managed to seize that new form of pictorial expression and convey it in a sculptural shape – incidentally, it is often said that his sculptures are the counterparts of Willem de Kooning’s canvases, in a certain symbiosis between shape, gesture and colour.

From his first solo exhibition at the Martha Jackson Gallery in 1960, John Chamberlain seduced a large number of collectors and artists with his perception of matter. They included Robert Rauschenberg, Donald Judd and Andy Warhol. Andy Warhol even acquired Papagayo (1967), one of John Chamberlain’s largest galvanised‑steel sculptures, which was later exhibited at the Guggenheim Museum, New York, in 1971 for the artist’s very first retrospective and on display here. Papagayo is characteristic of his work in the second half of the 1960s, when Chamberlain was experimenting by briefly choosing to forgo colour and give free reign to the shadows and lights on the surface of the metal in a minimalist bent. That interlude accentuated the density of the metal that became so malleable in the hands of the artist.

John Chamberlain proclaimed himself a three‑dimensional collage artist, because he assembled the most varied parts in a new structure (while preserving the initial properties of the medium). That was the case with Double Hooded Jim (1974) and Silver Plait (1976), which distinguish themselves by the assemblage of several parts that come to form one single entity. His sculptures have no narrative; they shine with an inherent poetry on the sole basis of their shapes, demonstrating the importance of Chamberlain’s artistic choice in assembling and balancing the parts: “Some seem to think that I work with found parts, but that isn’t the case. They are chosen, you see […] there is a great deal of magic behind that choice”. Neither the joints (welding) nor the use of colour or materials are, then, significant, except insofar as they test or (re)define shape. In a certain way, John Chamberlain invited viewers to discover the unknown he made from what already existed: “They [people] weren’t curious about what they didn’t know. Probably the key activity in the occupation of art is to find out what you don’t know”.

The idea of assemblage is central in all of John Chamberlain’s oeuvre, both in his working of metal and in his pictorial exercises. The series of works on paper View from the Cockpit (1976) shines with the intensity and pureness of the colours projected in a graphic whole – a nod to Robert Delaunay’s orphism. His rarely exhibited monotypes date back to the middle of the 1980s and showcase yet another different exercise, which could be sculpture not in volume, but on a two‑dimensional support to which he applied colour through collage and assemblage.

A series of photographs is also to be displayed on the occasion of the Sculpture exhibition, completing the overview of the various aspects of the artist’s work. In 1977, John Chamberlain started experimenting with a Widelux camera. Its unique structure made the lens pivot on a panoramic horizontal arc to obtain distortive effects that would be impossible with traditional cameras. Chamberlain took the photographs as he swung the camera, as in Downtown (1989).

In 1984, John Chamberlain declared: “I’m still making sculptures in the way that I made the poems”. At Black Mountain College, where he studied and then taught in the 1950s, he came to know the poets Charles Olson and Robert Creeley, whose teachings played a fundamental role in his practice. According to Olson, “the shape of a poem is crucial, or, in other words, its composition and its physical aspect. A poem must work with a sense of proprioception; it must be centred on bodily experience” – an idea that Chamberlain applied both to his works and to the titles he bestowed upon them. Creeley, for his part, encouraged his students to consider words as entities, visual facts that had their own distinct properties. “I like some words together, regardless of their meaning, two words or three words that don’t mean a thing, but that look pretty. […] I’ve started to make lists of words I like, that are beautiful, with lots of ‘p’s and ‘o’s”, explained Chamberlain. He compiled words and letters for his titles to find the right fit between shape, colour and space. Opera Chocolates (1994) is a perfect example of that harmonious visual adjustment between the ‘o’s, the ‘p’s and the ‘c’s, which mirror the shape of the sculpture. That exercise, which he devoted himself to his whole life, attests to the artist’s irony and great sense of humour.

Also in 1984, the theorist Hal Foster wrote that “the space vacated by the old ‘sculpture’ category” had given way to the new, underlining the importance given to both the medium and space, which transcended the traditional dogmas of the discipline. The Sculpture exhibition thus invites viewers to observe countless variations upon shapes and space masterfully wielded by one of the greatest artists of the twentieth century. 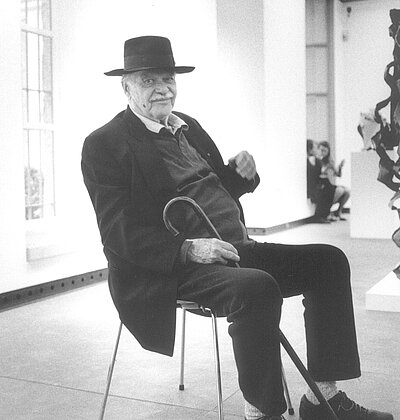