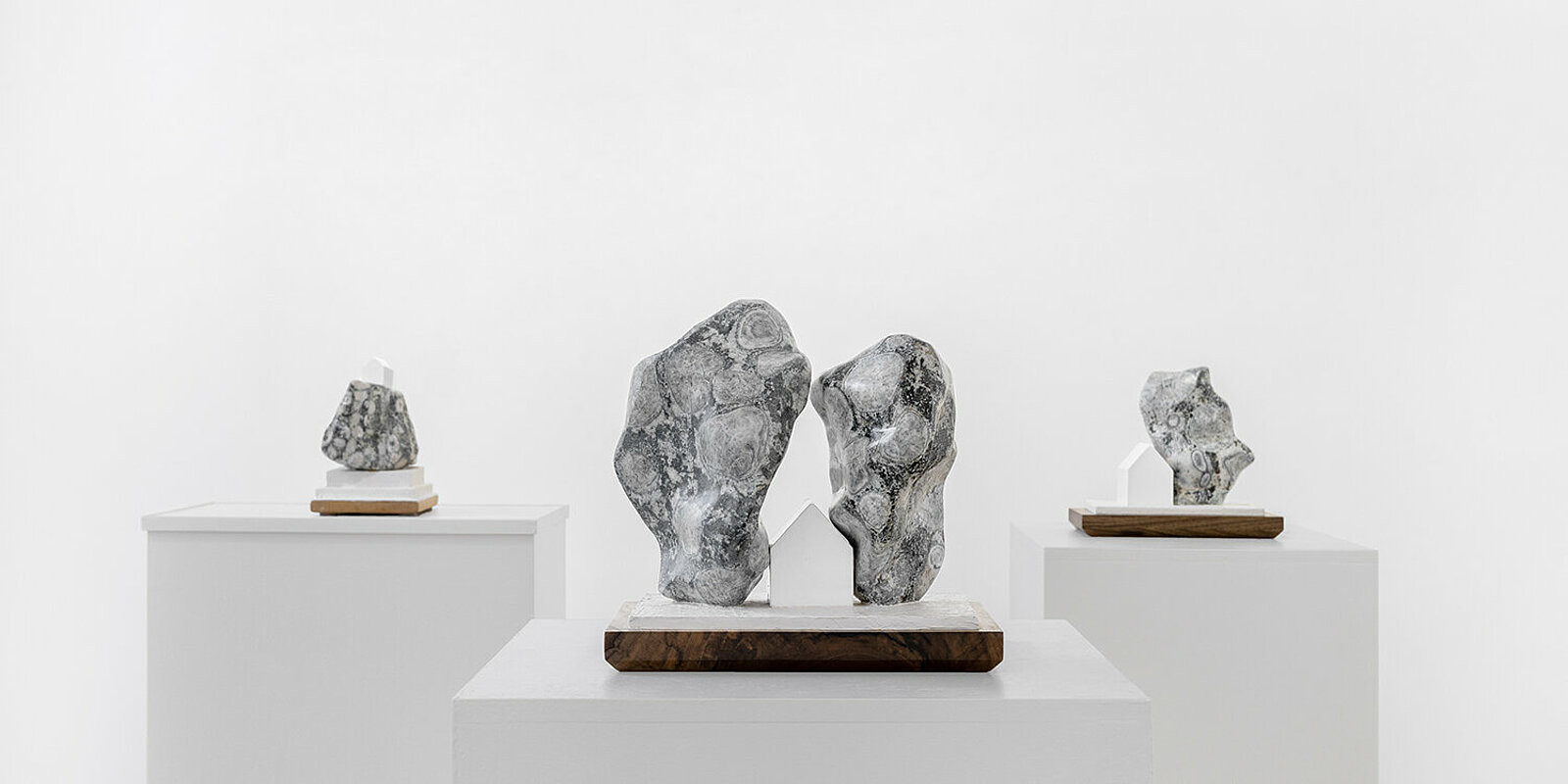 The exhibition will be accompanied by a publication.

These "sign-writings" were not handled with any real efficiency for thirty years, and they have now become the centre of my work, thus granting me the opportunity to claim one of my everlasting interests: to become part of a pictorial art movement that refers back to Minimalism, to monochrome works, to a brand of radicalism that prompts wariness, or even an absolute rejection of narrative through pictorial means.

Galerie Karsten Greve Paris is pleased to announce a new solo exhibition of French artist Loïc Le Groumellec. Entitled Sculptures and Gouaches, it presents a collection of brand-new works on paper from his series Écritures, alongside 19 new sculptures from the series Mégalithes et maison, in orbicular diorite and marble / lacquered wood.

During his studies at the École des Beaux-Arts in Rennes, Loïc Le Groumellec discovered a set of lithographs depicting megaliths – a structure he was well acquainted with – in the institutional archives. Born in Vannes, he grew up in the Gulf of Morbihan, a place particularly rich in mystical remains of the Neolithic period.  The enigma of the inscriptions engraved in the Gavrinis cairn – which remain undeciphered to this day – together with dolmens, menhirs and the wilderness of his native Brittany fed his imagination, as it had for generations of artists and writers before him.

While preserving the sacred dimension of the circular signs of the Gavrinis cairn, the artist explores a form of minimalism in his own enigmatic Écritures featured in the gallery. "These signs or “runes”, a kind of writing or metaphysical symbols have always been present in my paintings", explains the artist when talking about his pictorial language, the nature of which allows for an infinite array of variations. The symbolic repetition lends a sacred dimension to his images. In his book "Pierres,” the poet Roger Callois writes: "It takes a lot of light to distinguish them and even more imagination to be able to interpret them. Most of the time, their meaning escapes or is unclear, like the concentric curves, the parallel meanders at Gavrinis, whose mighty forms resemble a wonderful imprint left at the dawn of time, on a cooling rock, by the thumb of a careless demiurge".

The creation of these gouaches requires much rigour and concentration, not unlike the work of the monk-scribes during the Middle Ages. The artist explains: "I have just finished some gouaches on which I worked austerely for a fortnight. In fact, I have been painting the same picture for forty years”. He says he does the same work over and over again, turning his creative process into a sacred ritual: “These writings allow me to open up a space for an obvious abstraction, but also to restate what I have been claiming for nearly thirty years: the spiritual dimension of the act of painting and the depiction of the sacred through megaliths and these writings.” 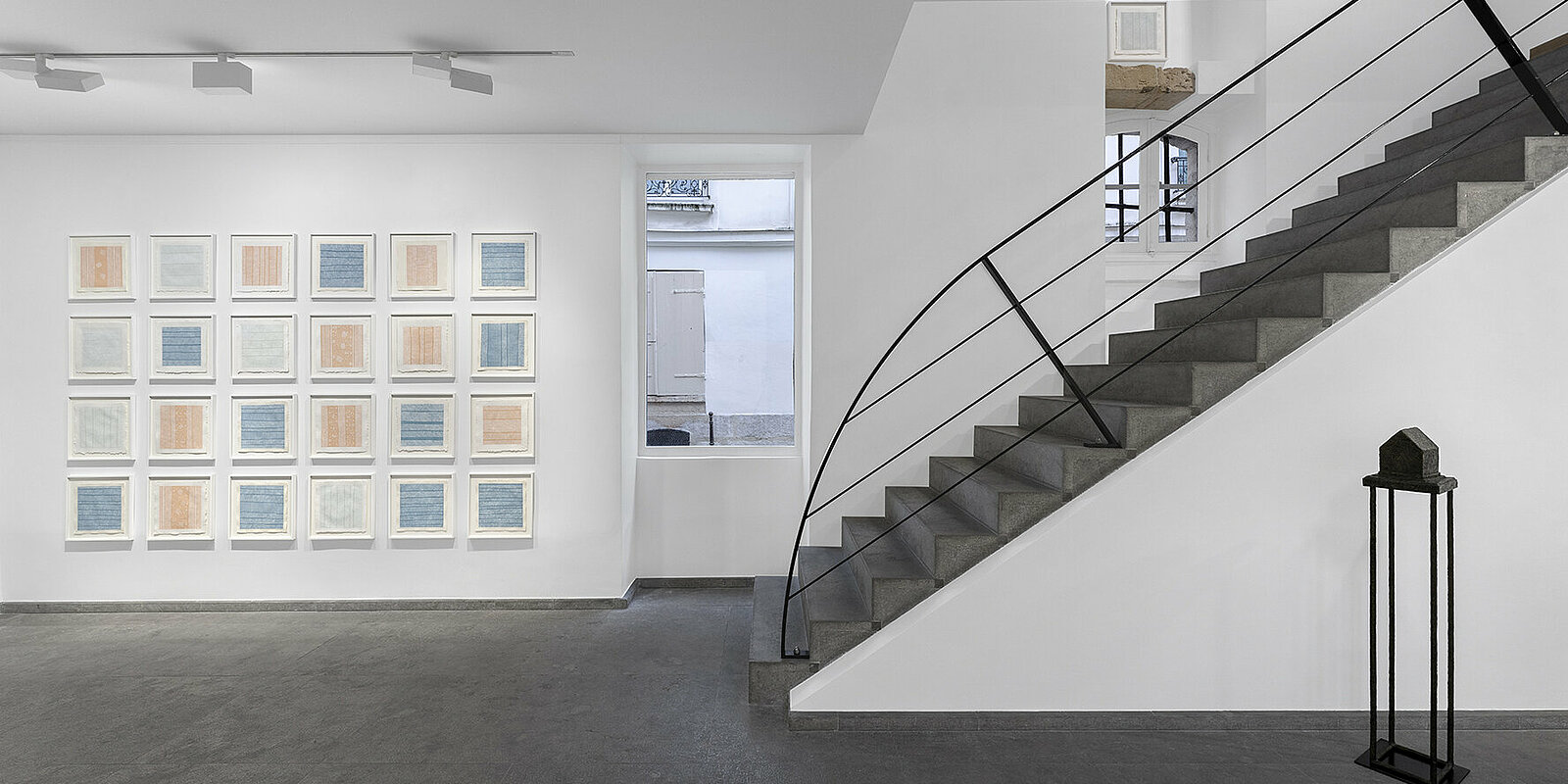 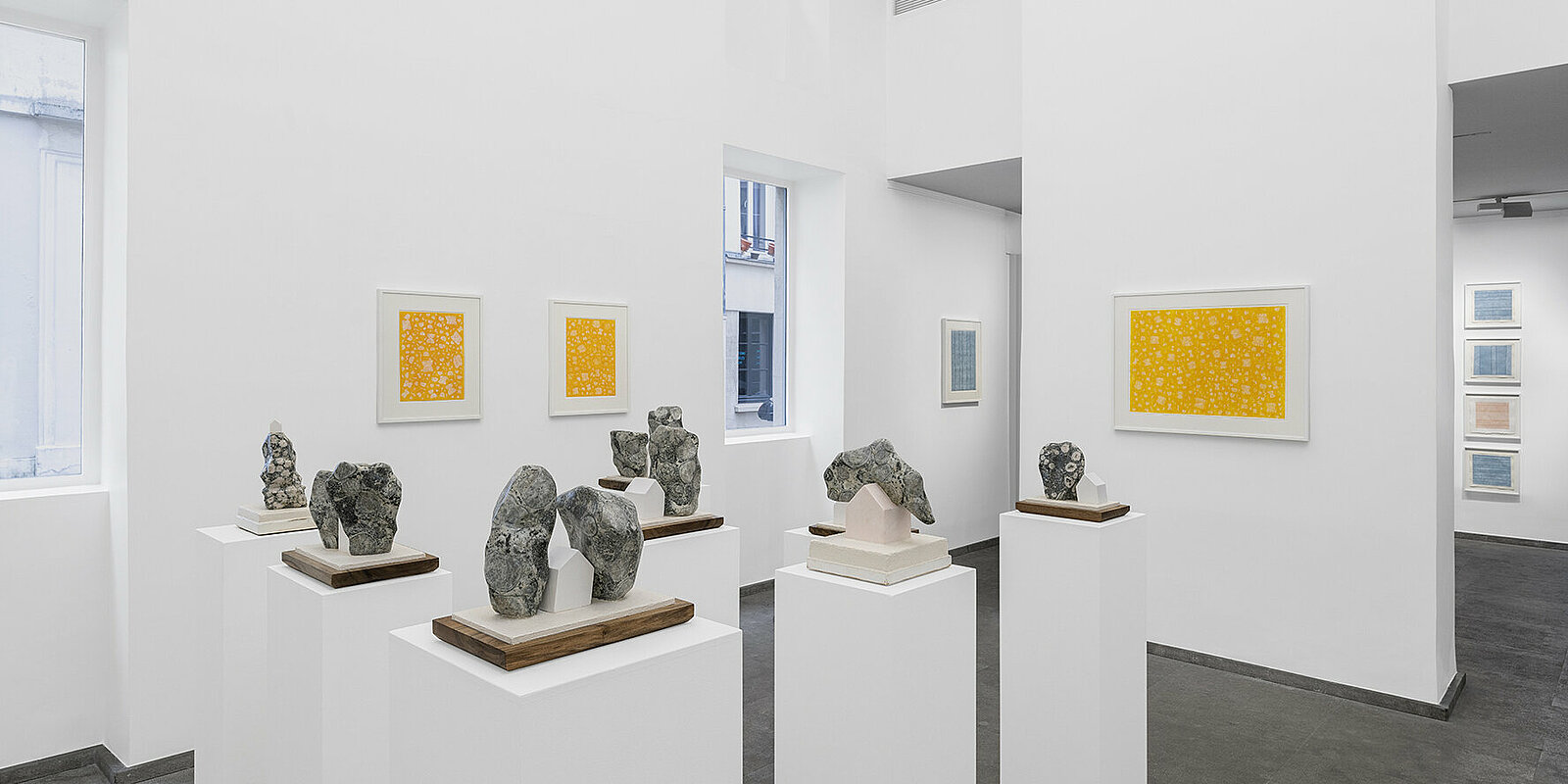 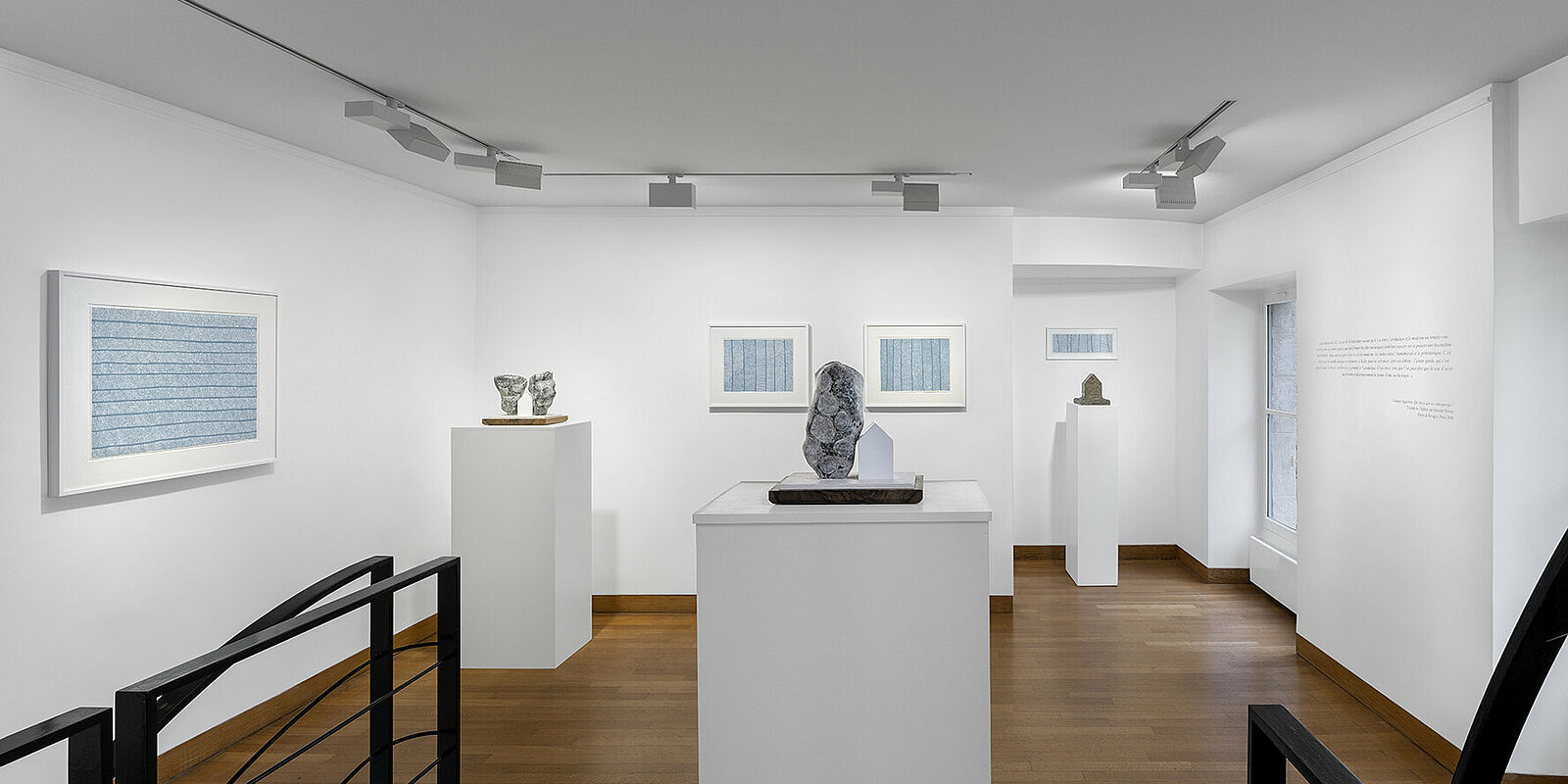 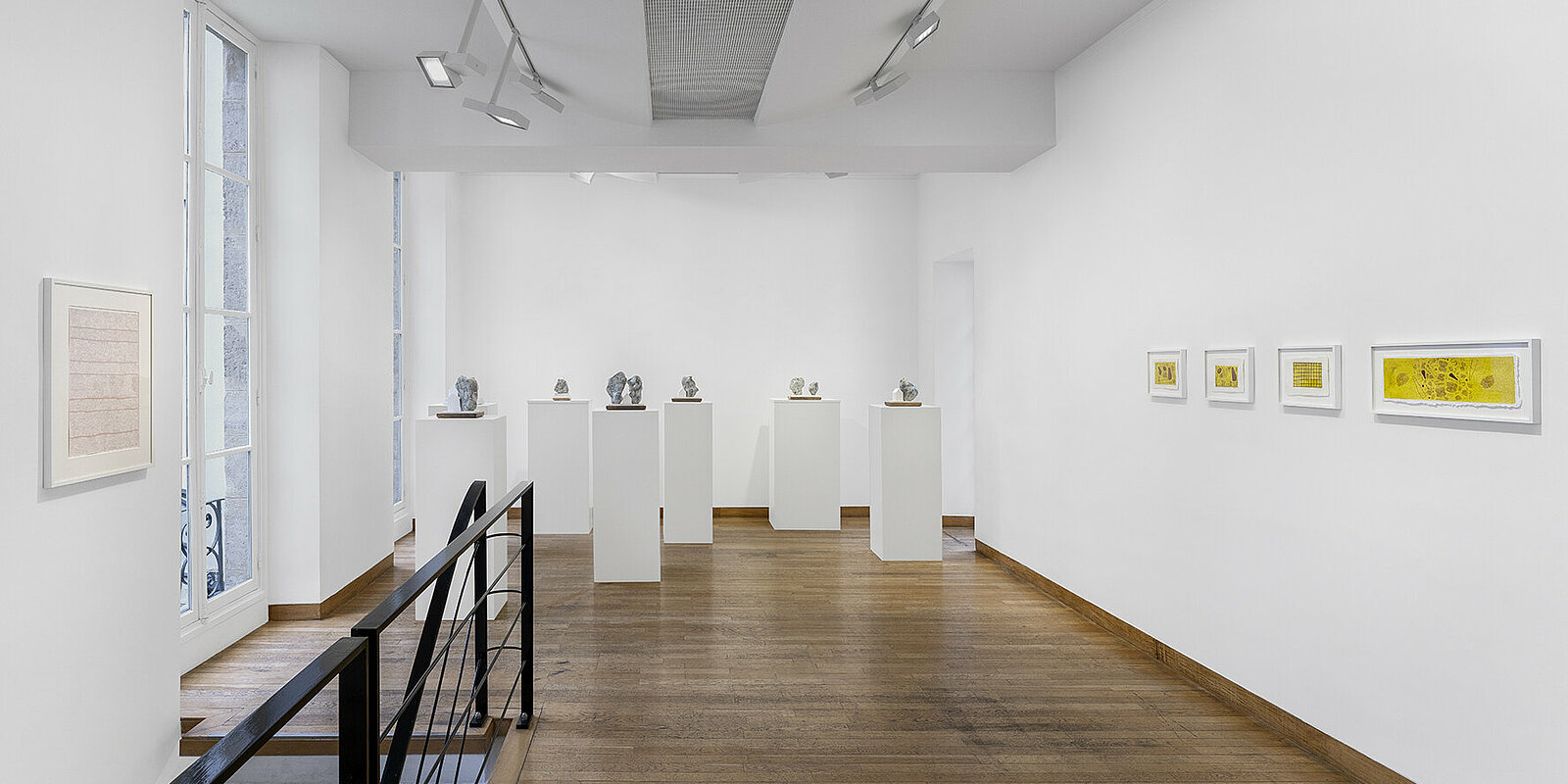 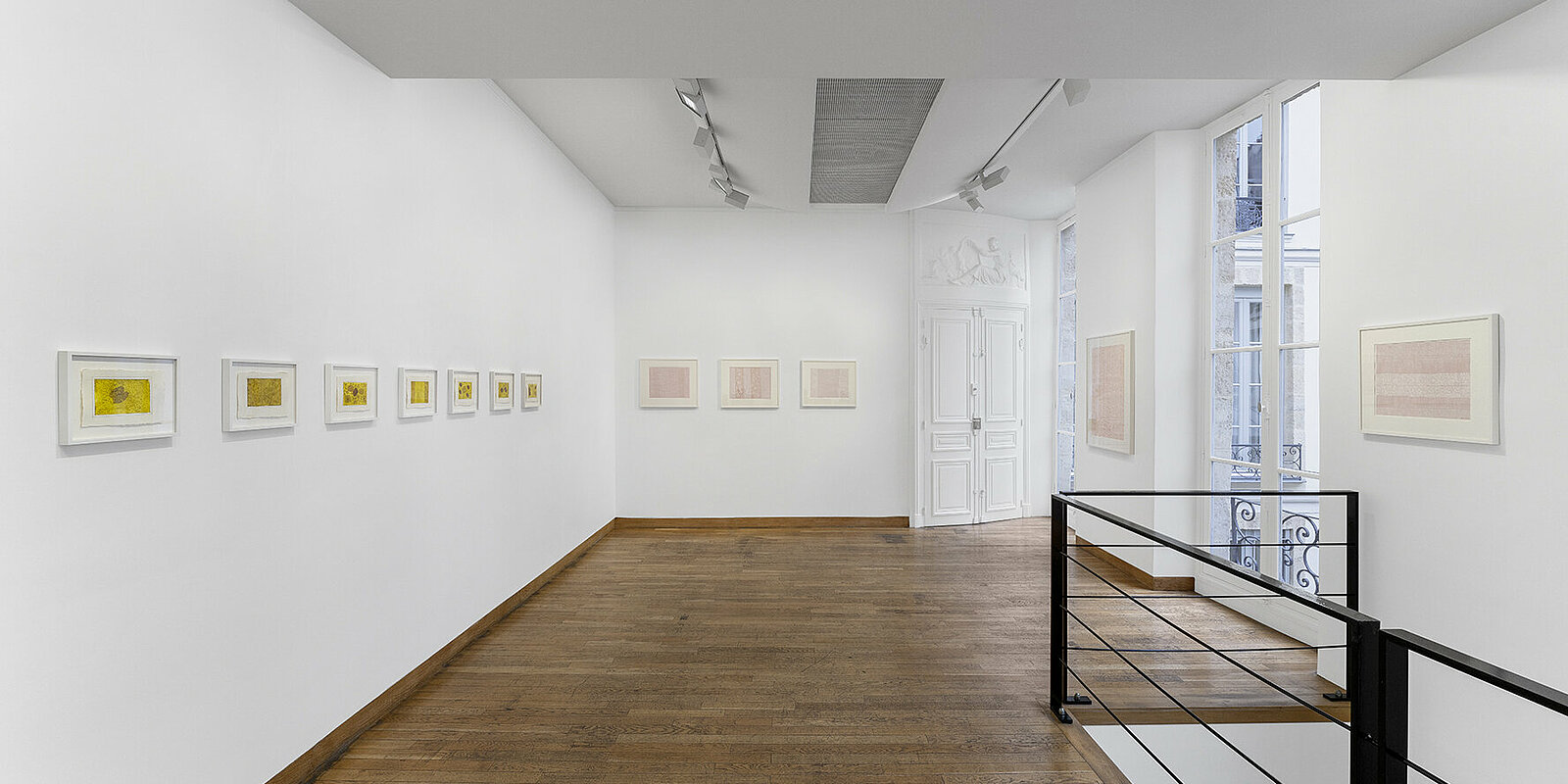 Abstraction, minimalism, and sobriety appeal to him much more than the pop culture and figurative expressionism of the 1980s. Like Niele Toroni, Loïc Le Groumellec sees paintings as imprints of substance on a surface, and has remained faithful to this minimalist thinking for almost forty years. From the start, he chooses to reduce his palette and his motifs as a way of going back to the origins of pictorial creation. He paints pure forms, moving towards the essential: a house, a megalith, a cross standing out against the opalescent background in an austere chromatic range of cold browns and blacks. It is in the illustration of books that Le Groumellec releases the bright reds, blues and yellows, a contrast to the mineral colours that he favoured before. This new stage, this transition to colour, is a continuation of a work in progress.

The layout of the exhibition places these gouaches in dialogue with a series of new sculptures, Mégalithe et maison, created between 2016 and 2021. The menhir in all its forms has been present in Loïc Le Groumellec's work for over thirty years, particularly in the series Mégalithes, made of lacquer on canvas. The stoic and primitive silhouette of these rocks whose purpose remains uncertain are constantly being reincarnated. The small white houses in lacquered wood, some in marble, confront and nestle against the menhirs carved out of orbicular diorite. The quarries of this rock, now depleted, were found mainly in Corsica, near the village of Sainte-Lucie-de-Tallano. Its name is derived from the circular patterns of the stone, which look like eyes, evoking the legend of Saint Lucia of Sicily, the patroness of this Corsican village who offered her eyes to the Virgin Mary as a sign of devotion. The theme of vision is woven into Le Groumellec's work through the exploration of blindness and the effect it has on the way we see–through the concentric circles of the rocks or the sibylline symbols in his paintings and drawings. The notion of blindness has always interested the artist, who used it as the subject of his graduation project at Beaux-Arts. To give a smooth, almost velvety appearance to the orbicular diorite, the artist goes through a long process of sanding, which allows him to achieve the desired shape and enhance its peculiar features. The raw material is tamed, rendered smooth and docile, the angles are softened, accentuating the sensuality of the curves – like the figures of prehistoric Venus.

The sculptures of Mégalithes et maison emphasise the status of a house, as a home, showing the symbiotic relationship between exterior and interior, the wild and the domestic. The poet and writer Yves Peyré describes the harmony between these two elements as follows: "The house seems to crouch against the rising stone, the menhir to lean tenderly towards the building". The smallness of the houses contrasts with the solidity of the rock, and yet, the one naturally complements the other, creating together an abstract poem of forms.

Neither signifier nor signified, the writings and sculptures do not really carry a defined meaning, but rather a presence of pure formal elements. Loïc Le Groumellec's body of work is interwoven with the formal, yet abstract poetry of the Celtic spiritual heritage. Through his work, he demonstrates that the archaic will always be contemporary, immersing the viewer in an enigmatic cosmogony. Through the circular and repetitive patterns, the pieces echo each other, their meaning remaining as indecipherable as the marks on the Gavrinis cairn. Loïc Le Groumellec thus makes the essence of pure visual expression tangible.

What distinguishes the Gavrinis monument from all the dolmens that I have seen is that almost all the stones that make up its walls are sculpted and covered with bizarre drawings. They are curves, straight lines, broken, drawn and combined in hundreds of different ways... Among a multitude of strokes... a small number can be distinguished which due to their regularity and their singular arrangement could resemble writing characters... There are even chevrons, zigzags and other lines impossible to describe.

Prosper Mérimée, Notes from a trip west of France, 1836 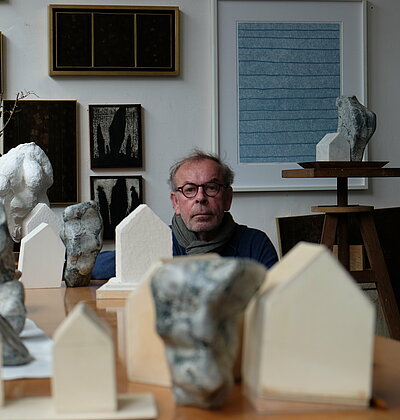