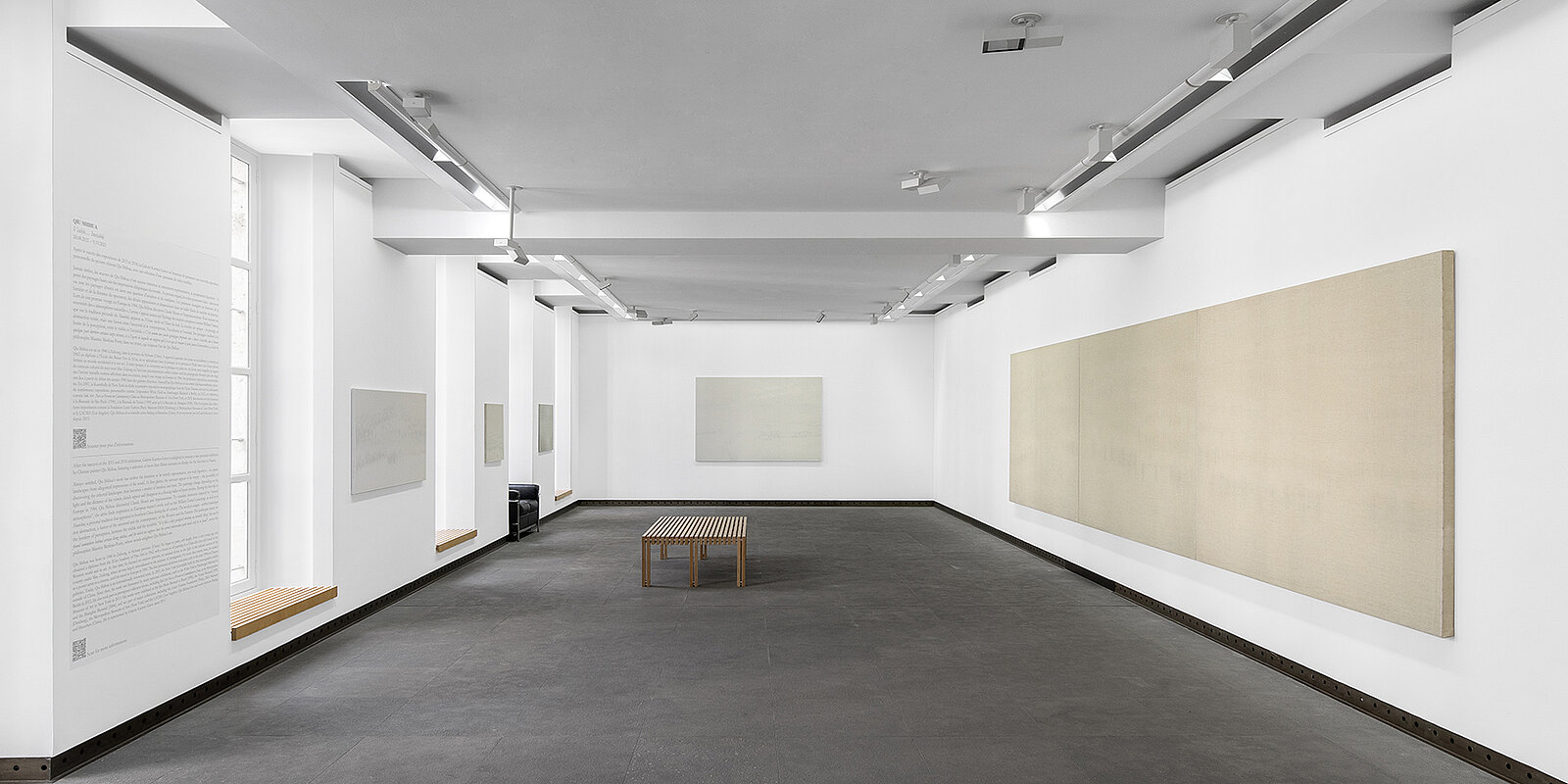 After the success of the 2015 and 2018 exhibitions, Galerie Karsten Greve is delighted to present a new personal exhibition by the Chinese painter Qiu Shihua at its Parisian gallery, featuring a selection of fifteen canvases painted between 2000 and 2019 and on display for the first time.

Nature has always been at the heart of the artist’s work. Always untitled, Qiu Shihua’s work has no intention either to be strictly representative, or truly figurative – he paints landscapes from allegorical impressions of the world. At first glance, the canvases appear to be empty – the possibility of discovering the ethereal landscapes then becomes a matter of intuition and trust. The paintings change depending on the light and the distance of viewers, details appear and disappear in a flowing ballet of brush strokes. As when viewing impressionist paintings, looking too closely prevents from seeing anything. During his first trip to Europe in 1984, Qiu Shihua discovered Claude Monet and his artistic movement, in which impressions are key. “What I do here […] will simply be the impression of what I, and only I, have felt,” said Monet, and Qiu Shihua has appropriated this concept. He translates memories inspired by “natural atmospheres”, as did William Turner in his late works. Qiu Shihua finds his inspiration in Shanshui, a pictorial tradition that appeared during the 4th century in Southern China. A Shanshui painter does not seek to create an illusory or realistic representation, sometimes working without ever having seen the landscape that they are painting. What matters is to paint the sensations that the idea of the sight brings to the spirit. Qiu Shihua stays true to this ancient pictorial tradition from his country, keeping to its visual language: the absence of linear perspective and the rhythm of blank patterns to engage viewers in active contemplation. He goes further in that quest and reappropriates Shanshui through Western techniques, preferring to use oils rather than the traditional ink. The result is unique – neither landscape nor total abstraction, a fusion of the ancestral and the contemporary, the Western and the Eastern.

"... depiction and landscape are a lot at the beginning (of the painting process) and at the end only a little. The depiction becomes gradually less, and more vague, or, to put it in another way, whiter. Inwardly, intention, meaning, and spirit gradually become more peaceful, motionless, reserved, or flatter, blander, and lacking in any particularities. Outwardly, the inner vital spirit and a glow become more and more obvious. As if a sort of voice were there..."

This evolution coincides with the artist’s trip to the Gobi Desert at the end of the 1980s, a trip he refers to often. This spiritual pilgrimage was a turning point in the painter’s lifestyle and artistic approach as he converted to Taoism, an ancient philosophical doctrine founded by Lao Tse. In Taoist ideology, humans and nature are complementary, similarly to the Yin Yang. The quest for wisdom lies in harmony, which is found when the heart and spirit are aligned with the Tao, the Way of Nature, said to allow humans to free themselves from limits and let their spirits “ride the clouds”: when the external and internal are one.

In his canvases, Qiu Shihua gives shape to the Taoist concept of “action through inaction” – letting results arise through their own paths – or rather, its opposite: non-action through action. Through creative action, he realises paintings that raise questions in their apparent absence. He succeeds in painting emptiness. It is no accident that in Chinese, the words “white” and “emptiness” (respectively Baise and Kongbai) have the same root (-bai-). The colour white then represents the quest for emptiness as the ultimate essence of all things. In order to see, we need to reach beyond the glare of white light, beyond a brief glance, towards absolute perception.

"When I paint, I do not think of structure or theme; what I seek is a certain 'flavour' - a rhythm of spirit and energy, so that the soul drifts in the painting, like a shadow of the mind. Everything is flat and calm."

The Chinese painter modernises this ancient philosophy through his pieces, in which he creates a “space for reflection” based on dreamlike landscapes, a “transposition of the embodied subject into a transcendental subject, of the reality of the idealised world into an ideality”, to use the words of the philosopher Maurice Merleau-Ponty. His landscapes waver on the borders of perception, between the visible and the invisible: “it is like a deep geological stratum, an invisible ‘thing’, that can be found somewhere behind certain living entities, and for which we suppose that the correct observation point needs only to be found”, wrote Merleau-Ponty.

In the spectral landscapes of Qiu Shihua, white dominates in the most subtle variations. The art historian Michel Pastoureau wrote that white is the oldest colour, one that “speaks to us about what is essential: life, death, and perhaps also […] a little about our lost innocence”. It also plays the role of bringing universal balance – a landscape would not exist without whiteness. It is the most uniform colour in nature, one that manifests in all elements – the colour of primordial light, the beginning of time. “For me, having colour or not having colour is not an issue. With colours, all colours combine into one, which is somehow the same as having no colour,” says Qiu Shihua about his palette. The artist plays with the surface of the bare linen canvas, onto which he applies successive layers of paint which structure the nebulous atmosphere of the pieces. In this way, he creates discreet transitions between the figurative elements inlayed in the matter. The landscapes are diluted and progressively reveal themselves in nuances and transparencies, not unlike the mind becoming clearer during meditation. The many tonalities of white covering the small strokes of colour form a multi-chromatic kaleidoscope in which the landscapes disappear like noemas, hidden behind an opaque fog. Merleau-Ponty wrote that “what is tangible is not only things, but also everything that they give shape to, even through blanks, everything that leaves a trace on them, everything that is comprised in them, even through disparities and forms of absence”, like the trace of auras in landscapes present in absence.

In a silent dialogue, Qiu Shihua pushes his viewers to detach from their usual way of thinking and 20th century “-isms”, because the essence of his large paintings lies in contemplative meditation. Today, Qiu Shihua represents a new generation, between the modernisation of traditional Chinese art and the adaptation of the techniques and ideas of Western art, between landscape paintings and abstraction. 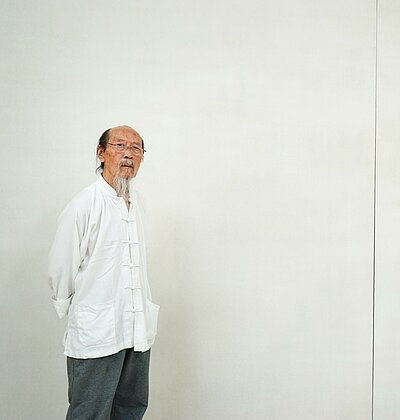