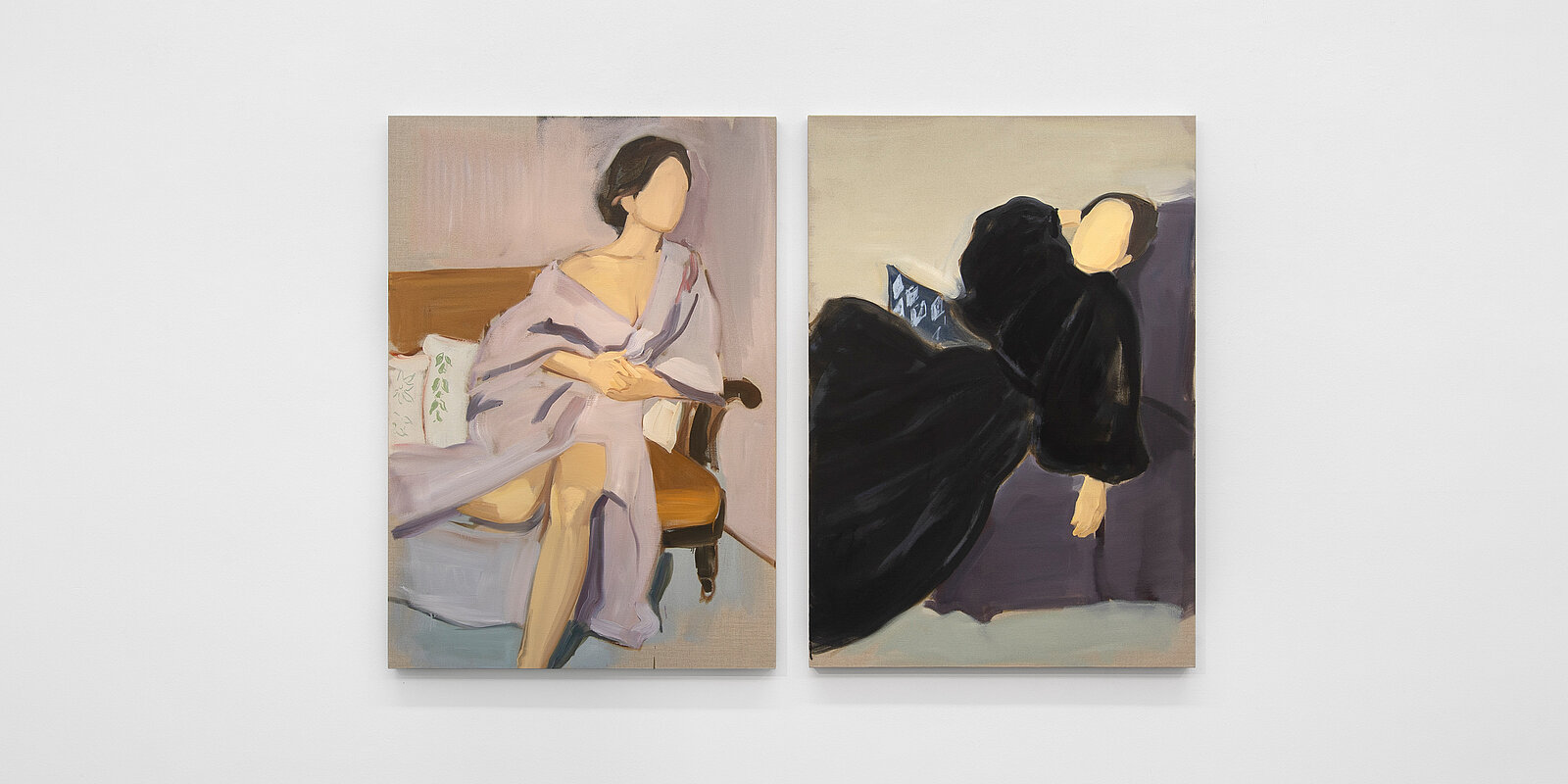 "For years I had an image lying on the floor of my studio of Balthus’ wife and daughter by the Italian photographer, Pierpaolo Ferrari. Perhaps, in my mind, it was the link between the beauty of the two women in that photo and the beauty and elegance of a Balthus painting – or maybe it’s how their bodies are positioned, which seemed to directly reference Balthus’ manneristic figure compositions. It might also be the ever-relevant motif of mother-and-child, or the narrative of birth and death, that made the image so intriguing to me. Either way, this image was the first diptych in a new series of work that spans more than two years, which was inspired by vintage images, found online, of artists in their youth – mainly 20th century painters whose shapes, colours and tones have been a constant presence in my own painting practice." 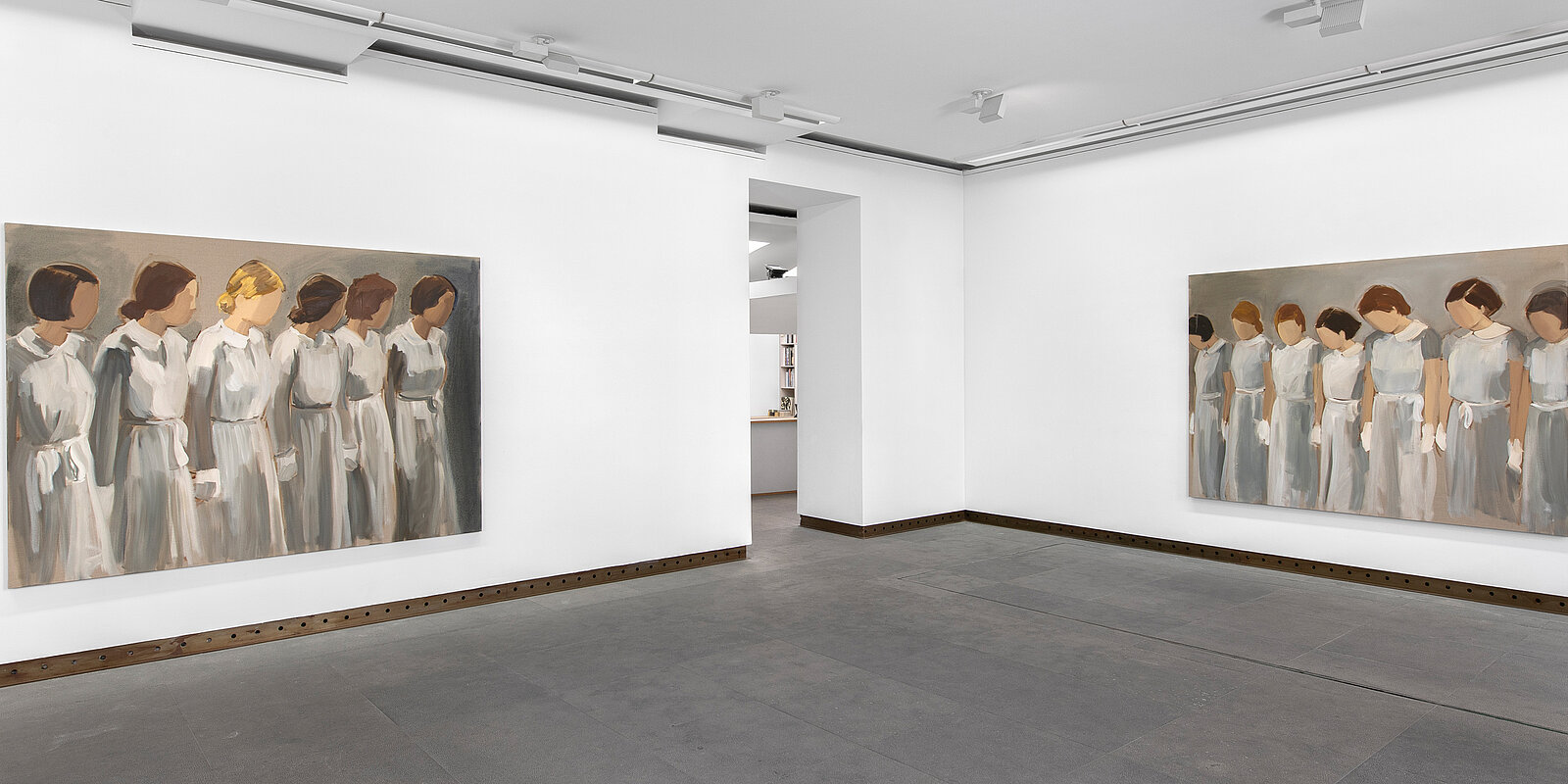 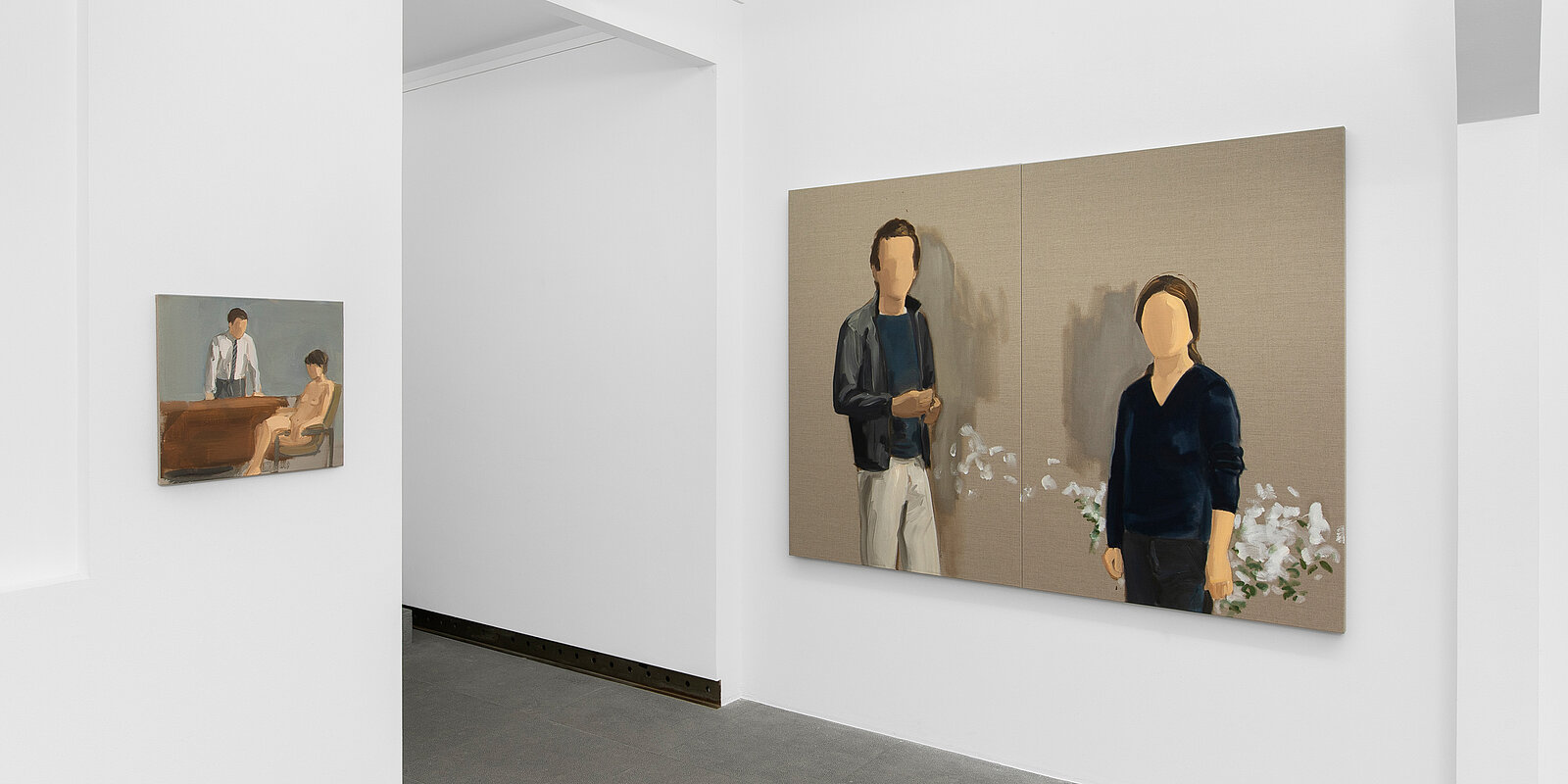 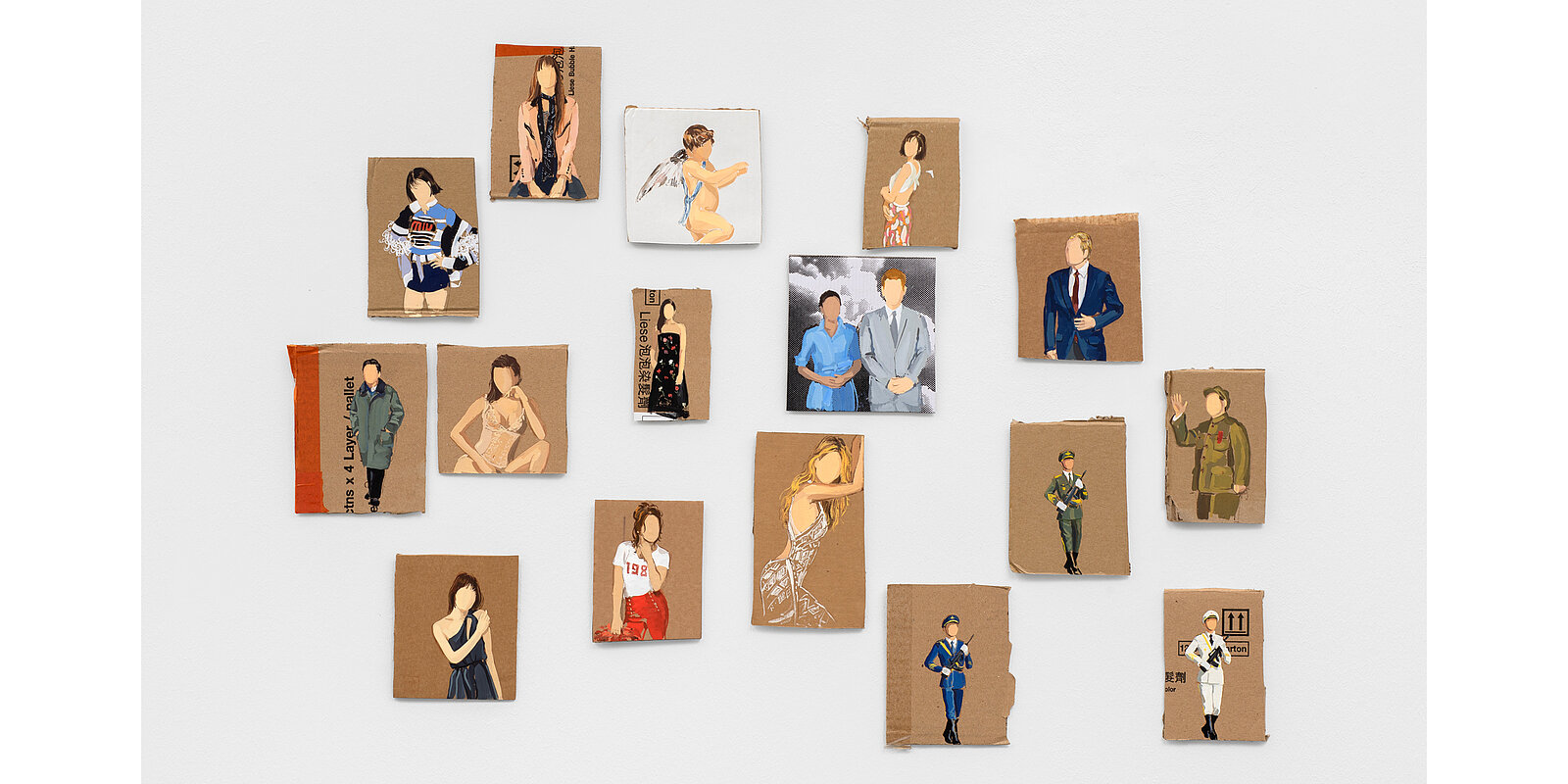 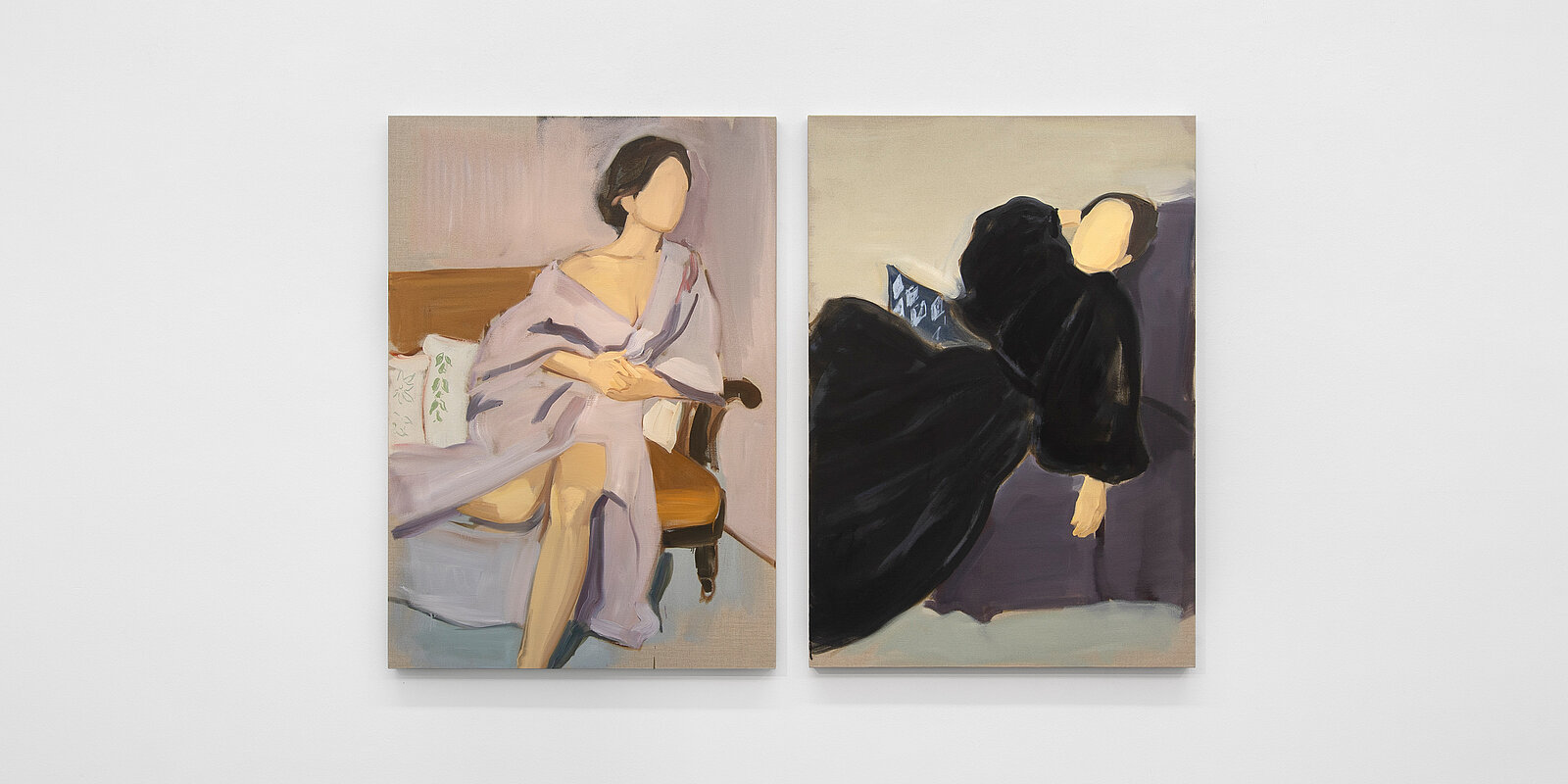 A Stranger’s Hand - The exhibition’s title alone evokes all the ambiguity that is typical of Gideon Rubin’s work, particularly in the series of ten paintings including two diptychs that pay tribute to the 20th century artists whose influence has been so crucial to his work, including Philip Guston, Willem De Kooning and Richard Diebenkorn.

Behind this series is a photo of the wife and daughter of the painter Balthus by the Italian photographer Pierpaolo Ferrari. The composition, the placement of the bodies and the elegance of these female figures echoed Balthus’ own painting in Gideon Rubin’s eyes, so he naturally chose that image for his diptych In the Grand Chalet, the first painting of his new series. 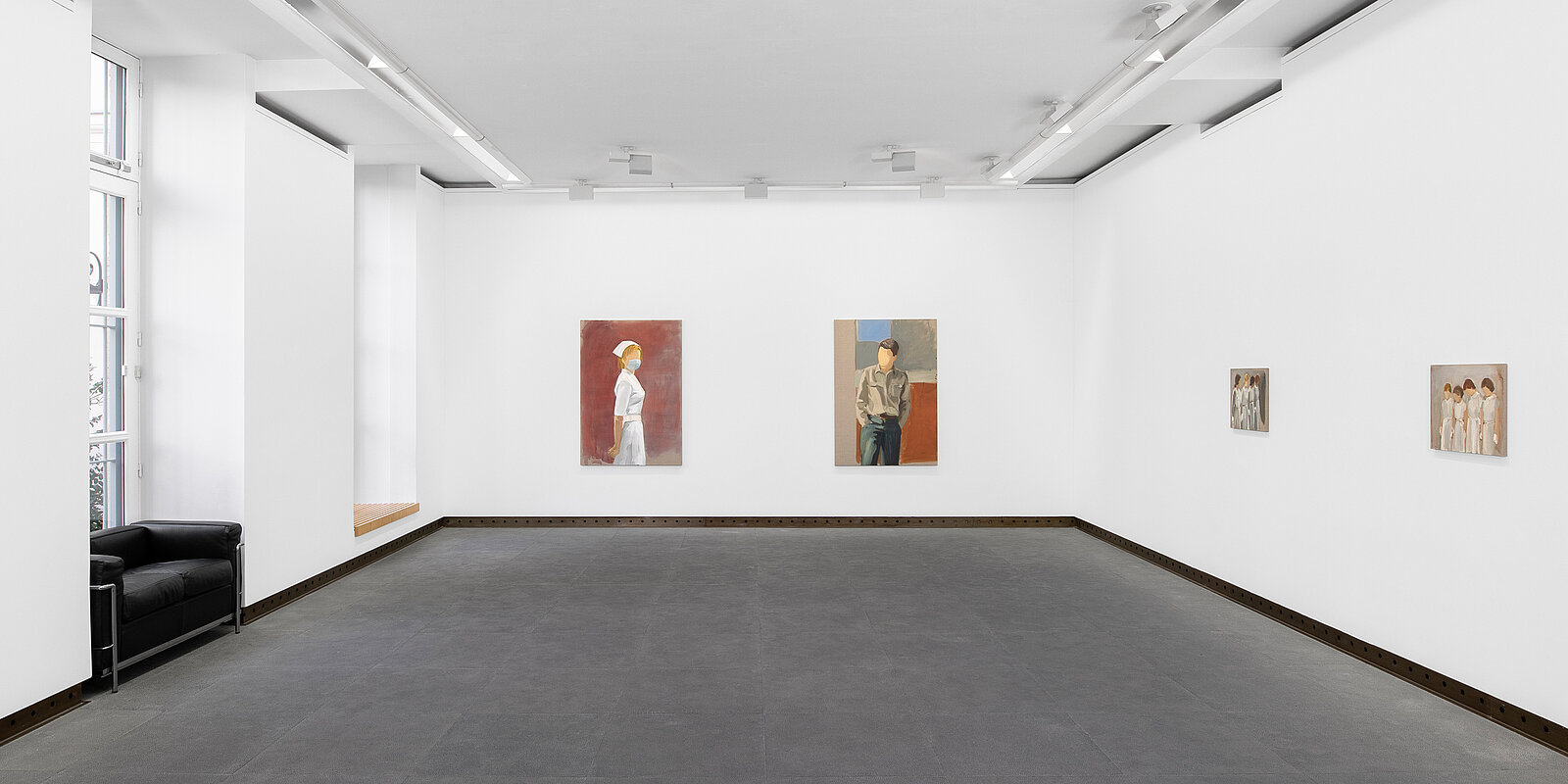 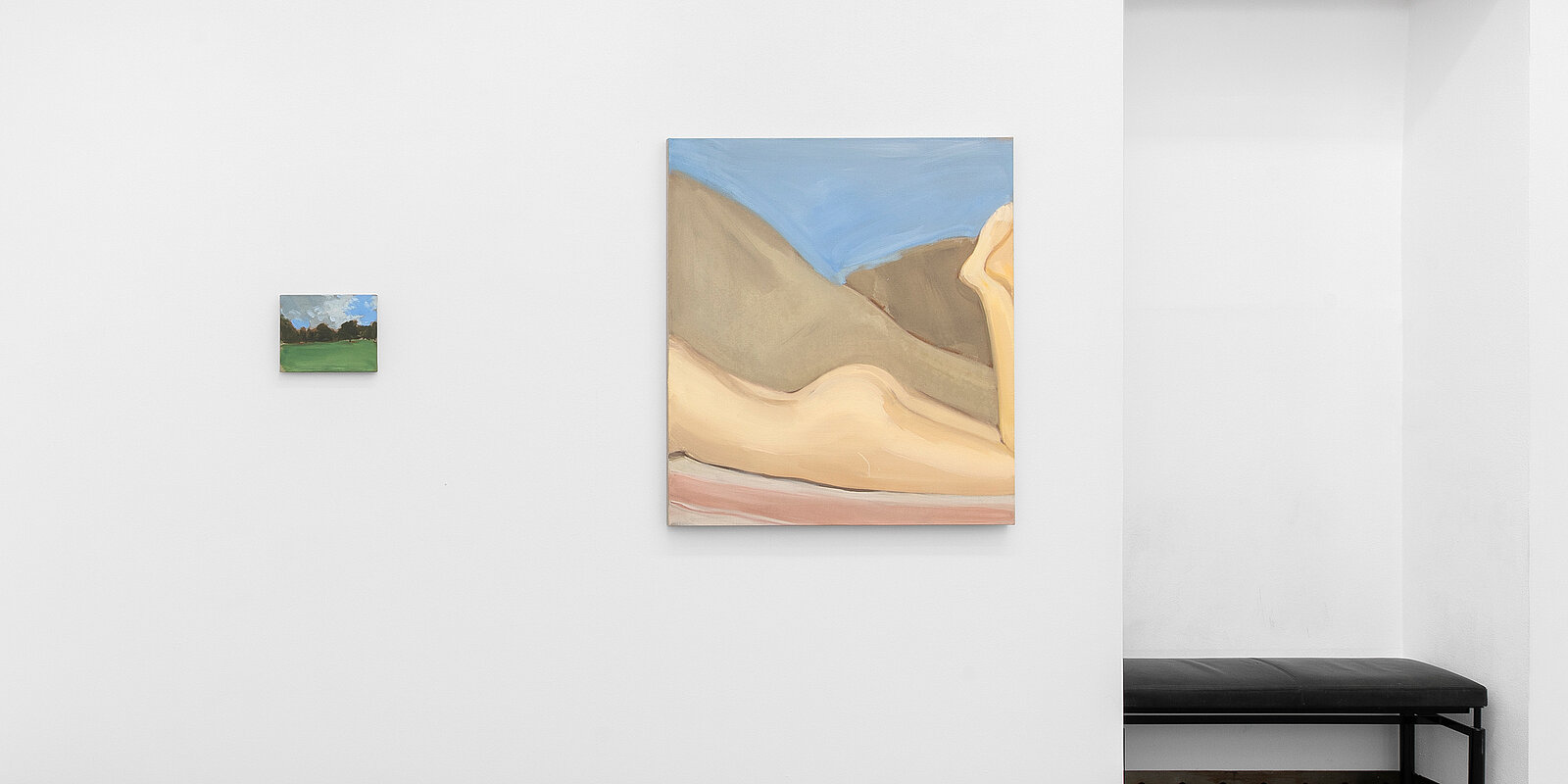 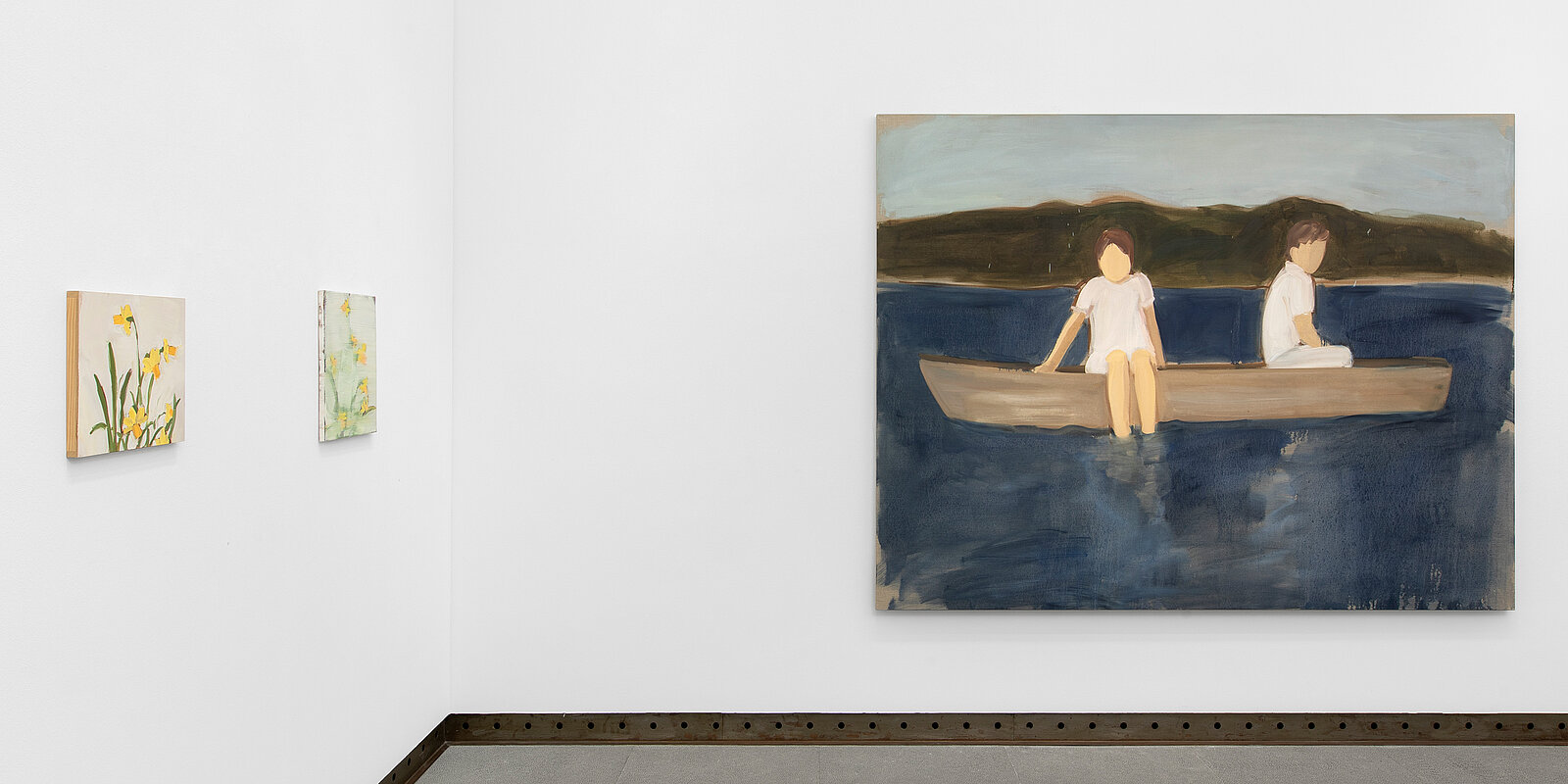 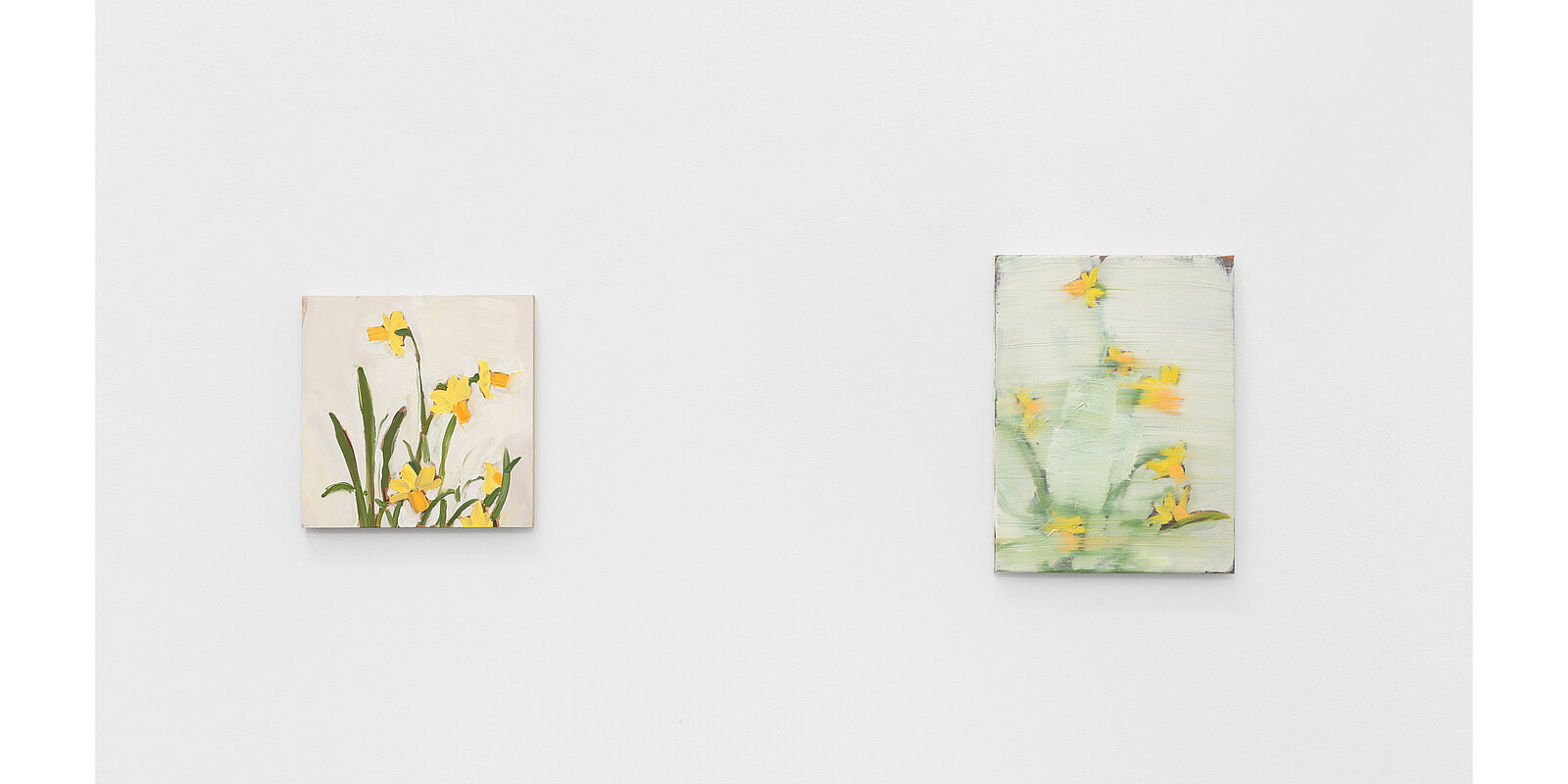 An attentive, comprehensive interpretation of these works brings to light the special attention given to the hands of these figures, which are at the centre of each composition.
Hands are fascinating parts of the human body. They can reach out or come together in a handshake.

They can unleash passions, be bulwarks, protective. They give away feelings, passing states or moods, they illustrate an attitude. They are creative, tools for talent and ways to express mannerisms.

Here, they crucially reveal the individuality of these figures of painters, writers and thinkers, who were so important for the artist paying tribute to them.
And yet, the word ‘stranger’ stands out in the title of the exhibition. The figures are strangers not because we do not know them, but rather because they are neither identified by a title, nor treated as individuals. The systematic erasure of the faces, of what makes someone a person, but also any reference to time or place, has been at the heart of Gideon Rubin’s artistic approach since 2001. That approach, which confronts the viewer with a stranger, also enables him to create an intimacy between viewer and representation – intimacy of the gaze that must be attentive and take the time to observe the image in the most minute details of a hairstyle, an outfit, a posture or an attitude. This attention then gradually shapes or reshapes a story from personal experience or universal knowledge, or perhaps a mix of both.
From then on, the hand is no longer that of a stranger. It has offered us the keys, unveiling the identity – either real or imagined – of the painted figure. And therein resides the beauty of Gideon Rubin’s works, which transport us into a story, complex and multi-faceted, personal and universal, invoking both past and present.

Gideon Rubin created his works using various sources, drawing from old newspapers, photos unearthed at flea markets, generic pictures in magazines, old art books and extracts from films. His portraits of artists are inspired by vintage pictures found on the Internet. He thus deliberately blends styles, eras and places to showcase the local and historical mechanisms of representation.
Identifiable at first glance thanks to his palette of sandy, pastel tones – sometimes emphasized by a luminous blue or a touch of red – the relationship between colour and its support is crucial to Rubin’s work. With a preference for linen canvases, but also working on wood and cardboard, he gives great importance to his choice of support, which appears under broad, vigorous strokes in a non-finito approach that lends his works a unique subtlety and lightness. His lively brushstrokes dissolve some parts of the composition in a fascinating blend of figuration and abstraction.

Gideon Rubin’s painting thus lives and breathes to the rhythm of a subtle pendulation between erasure and reconstitution, memory and imagination, generating a multitude of fictions and stories. 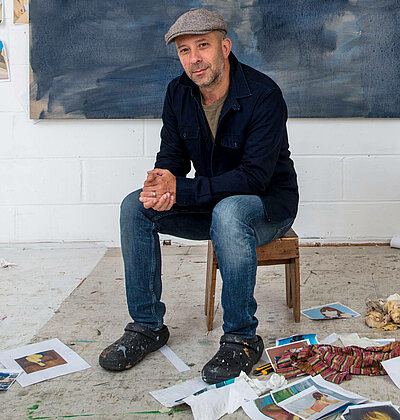