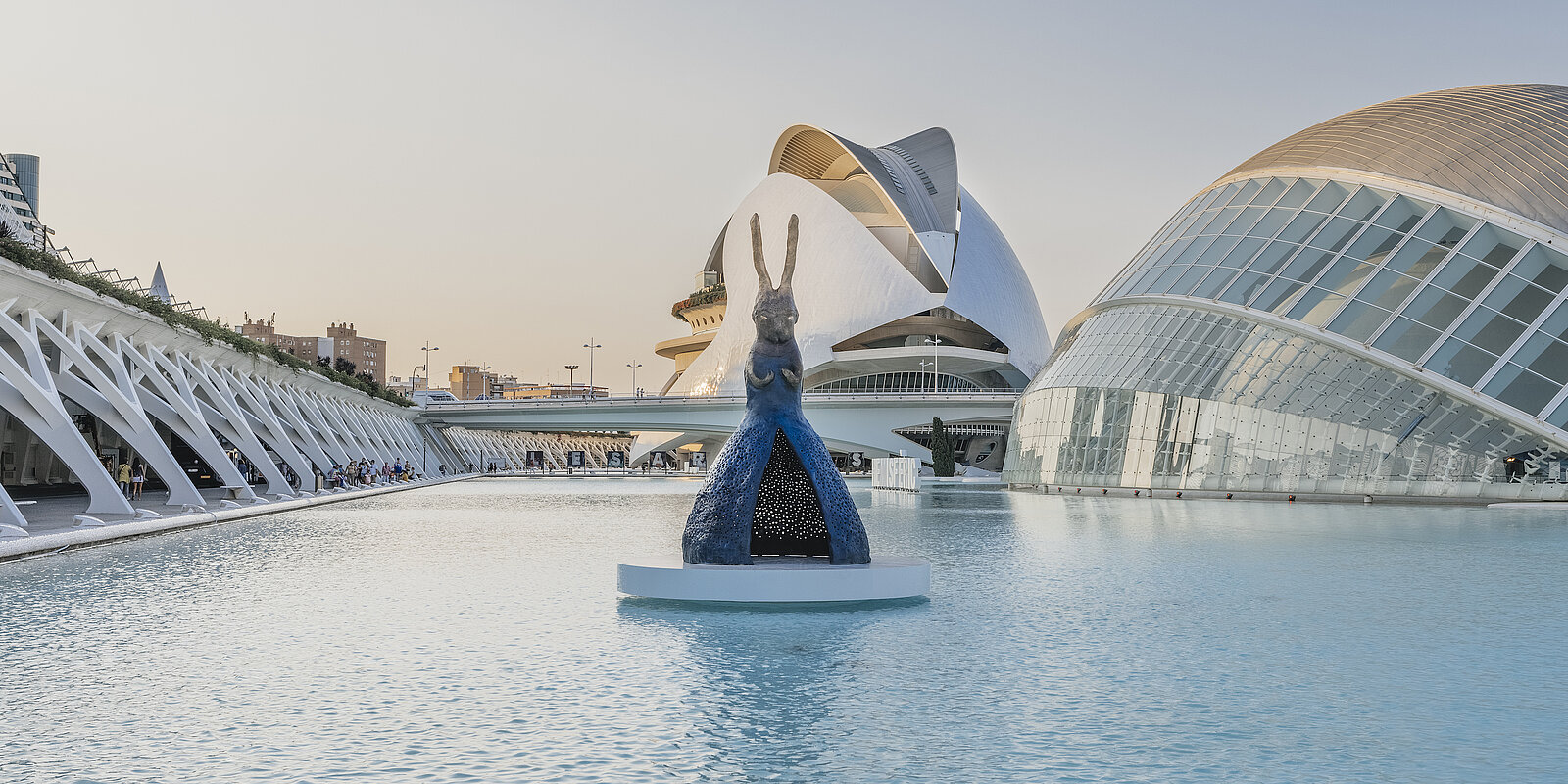 Poised like waterlilies, six public sculptures of Japanese-Swiss artist Leiko Ikemura hover over a blue pool of water that has long allowed an open view of architect Santiago Calatrava’s eye-shaped L'Hemisfèric. For Leiko Ikemura, the exhibition We are here / Aquí Estamos (until 6 March 2022) in Valencia is as much a return to Spain—Ikemura studied at the Escuela Superior de Bellas Artes in Seville—as a presentation of her renewed understanding of her own oeuvre. Before appearing in the built environment of the Ciutat de les Arts i les Ciències, Ikemura’s standing or reclining figures have traveled between mediums, such as drawing, painting, printmaking, photography, and sculpture. Their collective manifestation as bronze sculptures solidifies the artist’s invitation of the audience to the world dwelt by the wandering beings.

Among the six sculptures on view, four are in the reclining position, as if they are diving into the horizon of the pool. The four artworks—Double Figure, Cat Girl Lying, Lying Girl, and Catgirl with Usagi—directly invoke Ikemura’s ceramic pieces from the 1990s, which have been widely exhibited and garnered critics’ attention in both Europe and Japan. Rather than adopting the more commonly depicted posture of lying face up, Ikemura’s feminine figures face either downward or to the side. Simultaneously, when the hands are not covering the faces and removing the individual identity from each figure, they join firmly in front of the chest. Together, the reclining figures flesh out the numinous moment of quietness arriving after the tide of trauma has somewhat receded, in a condition much like the pandemic-swept world in which we find ourselves. 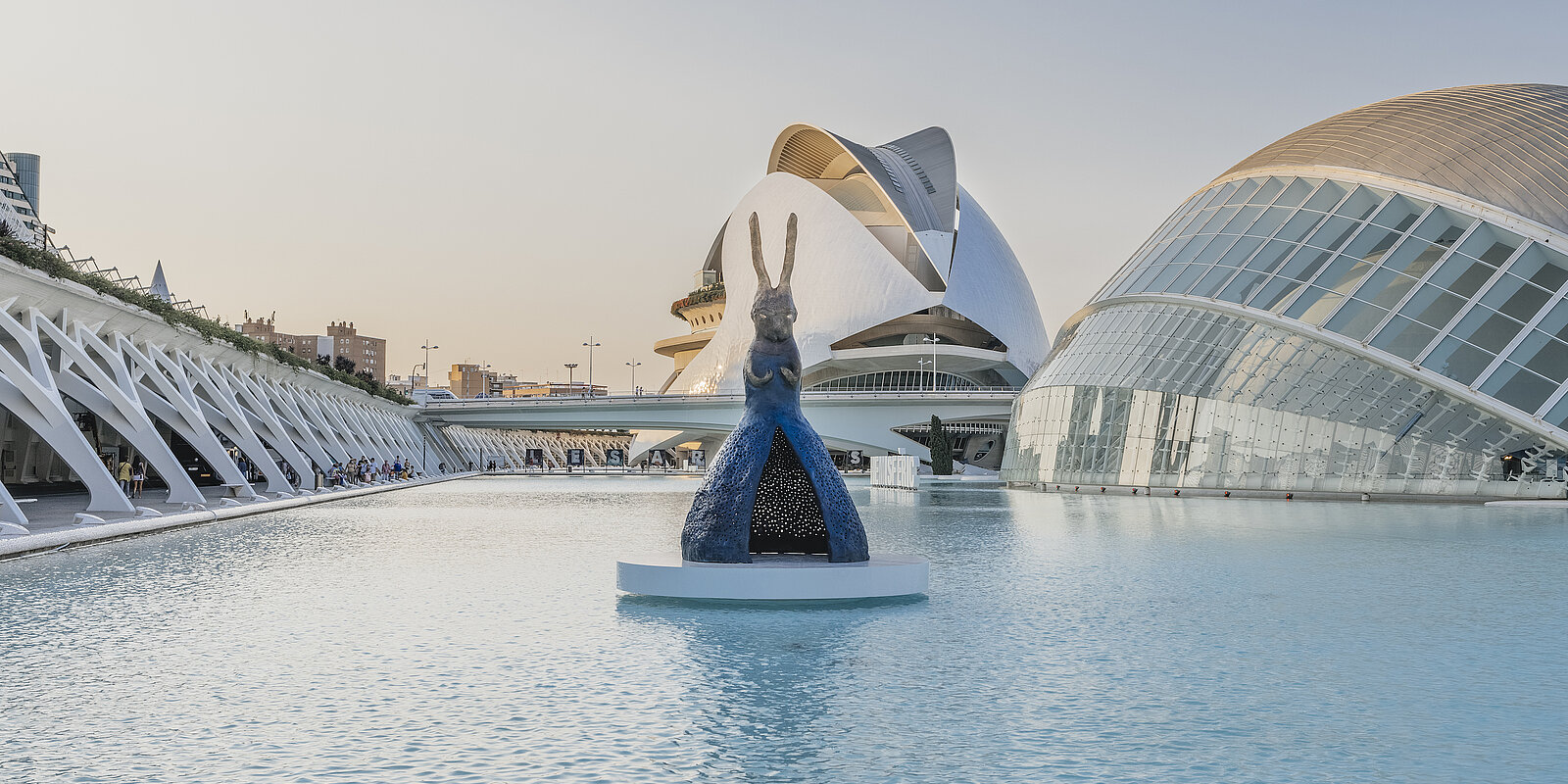 If the reclining figures could cast a grounding effect on us the audience, the two standing figures, through their tapering verticality that draws from the water, could help us experience yet transcend the much-needed moment of sorrow. Realized in a distinctively large scale for the first time, Usagi Greeting is reminiscent of Ikemura’s renowned sculpture Usagi Kannon, but its less clearly defined facial features and physical proportions have endowed it with an additional sense of tenderness and youthfulness. In the first glimpse, Figure with Three Birds is a headless torso that does not shy away from the state of devastation, but one could find solace in its coexistence with the animated birds and the tersely incised face that emerges from the back.

As the hosting institution of this installation of public sculptures, the Ciutat de les Arts i les Ciències is an architectural complex of great cultural significance, appealing to its visitors with a sophisticated sense of ambition that is characteristic of Calatrava’s geometric and undulating designs. The oval-shaped sculpture platforms designed by Philipp von Matt bring such design ideals to the fore. They enable the emotive work of Leiko Ikemura to blend into the environment and accentuate the architecture of the waterscape, eventually helping achieve an unprecedented symbiosis of art and architecture. 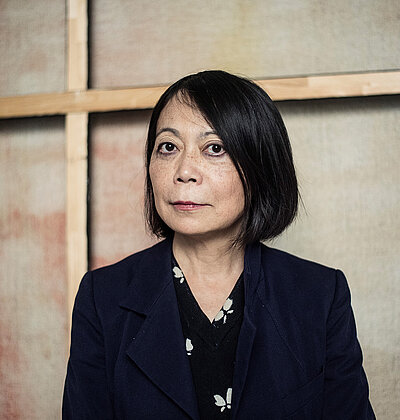